“My father is in this photo, and his signature is there,” said Richard.

It turns out that Richard’s father was a Hurricane pilot during the Battle of Britain. Richard, who is the Vice Lord Lieutenant of Hertfordshire and the former Honorary Colonel of Bedfordshire and Hertfordshire Army Cadet Force (B&H ACF), met with Col Ray Wilkinson, Chief Executive of East Anglia RFCA, at the RAF Club on 7 Nov 2019 in appreciation of all Richard’s efforts in supporting the Association and the Army Cadet Force.

Richard explained: “While we were growing up, my father never talked about his service with the RAF during WWII. This was not because it meant nothing to him. Quite the opposite.” 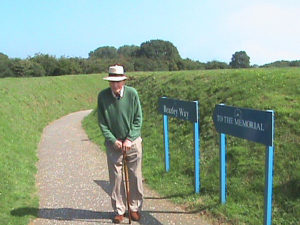 An article about Richard’s father, Wing Commander John Beazley DFC, entitled “The Story Behind Beazley Way” was published in the brochure “The Friends of the Few 1940 No 20” by the Battle of Britain Memorial Trust pays tribute to to his service. The path leading to the National Memorial of the Few is named after him in recognition of his remarkable career.

“He had flown fighters in the front line for most of the war, including Hurricanes in the two great aerial battles, the Battle of Britain and the Battle of Malta. He loved flying; and he loved the RAF. However, most of his RAF friends had been killed; and the constant pressures of front line combat over a period of five or six years had taken their toll. He didn’t want to dwell on it, and he certainly didn’t feel that he had done anything unusual.

As a child therefore, I wasn’t influenced directly by my father’s service in the RAF during WWII, and I have always been clear in my mind that just because my father clearly did extraordinary things, it doesn’t mean I could have emulated him. However, the values he demonstrated while serving were always present, values that are constant in all those who serve in the armed forces. He encouraged me to join the army cadets and to take it seriously; and later to serve (briefly until I was posted abroad) in what was then the Territorial Army.

It was only much later in my father’s life, when public attention began to be focused on The Few, that he felt able to talk about it. Even then, his focus was not on himself and his exploits, but on remembering those who had been killed. He appreciated the annual commemoration services held by the RAF and he played a significant role in the Battle of Britain Memorial Trust and the creation of the memorial at Capel-le-Ferne.

Being appointed an Honorary Colonel of the Beds and Herts Army Cadet Force gave me an opportunity to observe these values in action as young cadets develop into remarkable young men and women, under the care of the dedicated and selfless adult volunteers who staff the ACF.”