In addition to his RFCA role, Jonathan is the Suffolk County CCF representative and a part of the national Contingent Commander team run by Col Anthony Lamb. He welcomes feedback from Contingent Commanders in the East Anglia region on matters CCF, and will be seeking to represent both legacy and new contingents at a number of forums, whilst also proudly promoting the valuable work done by the CCF in the region as part of the wider UK youth engagement programme. 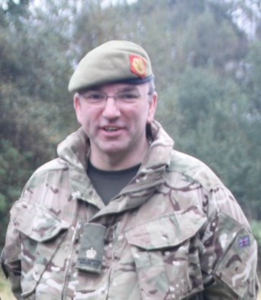 Jonathan is currently Contingent Commander at The Royal Hospital School (RHS) in Suffolk. He  has been at RHS for 16 years, 14 of which were served as the Contingent 2IC to the now Colonel Cadets for East Anglia, Marc Godfrey. His other roles at RHS are Biology teacher and boarding housemaster.

He has been extensively involved in the DofE Award at every level and in a wide range of expedition styles from cycling to horseback, and canoeing to sailing as well foot expeditions.

Jonathan transferred into the CCF after serving in the TA(V)R from 1990-2001 in various roles with 5 Bn Royal Anglian, 4/5 Bn Green Howards and 160 Reg Royal Logistic Corps. His first contact with the Army was at university through Sheffield UOTC between 1986-1990.

RHS CCF is one of the largest contingents in the country with 20 CFAVs and 430 cadets over 4 sections: RN, RM, ARMY and RAF. An active contingent, RHS has undertaken a number of large-scale exercises overseas in Germany and latterly the USA, where it is pioneering a cadet exchange programme with the US Junior Reserve Officer Training Corps (JROTC).

The East Anglia RFCA Membership includes around 160 voluntary members, like Jonathan, who interface with the local community and act as local ambassadors across the range of RFCA interests.

The Association has a broad base of volunteer members drawn from current and former officers of all three services and cadet forces, representatives from local authorities, local business communities, education and charities. Our common goal is to improve knowledge and understanding of the positive contribution of Reserves and Cadets within the wider community, to facilitate gaining and retaining cadets, Reservists and Cadet Force Adult Volunteers (CFAV).

Each of the counties has a dedicated CCF representative, with the addition of a regional CCF representative. Together with the representatives of the Sea Cadets, the RAF Air Cadets and the Army Cadet Force, they sit on the Joint Cadet Committee (JCC) of the East Anglia RFCA. The JCC exists to encourage greater links and communication between the Cadet Forces in order to promote the value of the Cadets within their local communities.