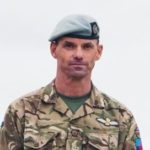 Lieutenant Colonel Andrew Bushby is the first Army Reservist to command 6 Regt AAC. He was commissioned into the 1st Battalion The Black Watch (Royal Highland Regiment) in December 1996, serving as a Rifle and Anti-Tank Platoon Commander in Hong Kong, Inverness and Fallingbostel, Germany.  During this period, he also deployed briefly to Northern Ireland and Kosovo.

He completed his flying training as a Lynx pilot in 2002 before being posted to 652 Squadron, 1 Regiment Army Air Corps in Gutersloh. During this tour, he was augmented to 1 (UK) Armoured Division as SO3 Aviation during TELIC 1 and commanding a Lynx detachment to Kenya for Ex GRAND PRIX.  This was followed by a grade 3 staff posting to Edinburgh as Operations & Training for 52 (Infantry) Brigade and a short tour on HERRICK as the Chief of Staff for the first forward based helicopters at Bastion.

Following the Intermediate Staff Course and Shrivenham, his initial grade 2 job was within the Equipment Capability area of the MOD as the desk officer for Apache, Lynx and helicopter engines.  He transferred to the Army Air Corps during this period and followed with a tour at Middle Wallop with the Command and Tactics Wing prior to taking command of 652 Squadron back in Gutersloh, Germany.  A further tour on HERRICK with Lynx Mk9A was followed by a staff appointment in the Joint Helicopter Command training department before becoming an Army Reservist in 2015 with the Aviation Warfare Branch at Middle Wallop.

In 2020, reservists from 6 Regiment Army Air Corps worked side-by-side with their Regular counterparts in 3 Regiment Army Air Corps during the summer to maintain, refuel and rearm the Apache during a major training exercise. Airtrooper Paul Roberts recounted his experience of this exercise. He and five other reservists from 6AAC started a three-week stint on Exercise Talon Hydra with refresher training on the Apache at Wattisham Flying Station. They then moved out into the field, working on Forward Arming and Refueling Points (FARPs) – the military equivalent of a Formula 1 pit stop – while living out on the STANTA Ranges in Norfolk.