Celebrations were scaled back to ensure public safety in response to the delayed easing of Covid restrictions. The council led an Armed Forces Day window trail, and the cabinet member for communities, Cllr Derek Davis, raised the Armed Forces Day flag in a tribute to troops.

The flag-raising ceremony was attended by senior military officers, Suffolk County Council’s Armed Forces Champion, Cllr Mick Fraser, and the Mayor of Hadleigh, Cllr Frank Minns. Wattisham Flying station was chosen for the ceremony because of its historical significance in past conflicts. The airfield spans over 1,000 acres across both Babergh and Mid Suffolk, has been operational since 1939, and was used in World War II by the United States Army Air Force before becoming a front-line air force fighter airfield during the Cold War.

Wattisham Flying Station is now home to a host of military equipment, including Apache attack helicopters equipped with guns, rockets and missiles to provide air defence and protect ground forces during the key stages of battle.

At present, around 2,000 troops from the Army Air Corps and RAF are based at the airfield. Sergeant Foulkes has been posted at Wattisham for 14 years, during which time he has been deployed to Afghanistan and Norway. When asked about Army life, Sgt Foulkes said: “By far my hardest time in the Army has always been, and will always be, sneaking off in the middle of the night so as to not wake my kids and remind them that I will be leaving for a couple of weeks or even months. 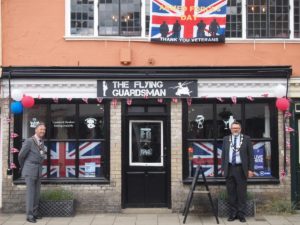 “Armed Forces Day is a good way to show appreciation for those on Operations and the hard-working service men, women and families who give up so much.”

Cllr Derek Davis, Babergh District Council cabinet member for communities commented: “Service life isn’t easy, with serving personnel having to uproot their families, miss loved ones while on tour and put their lives on the line during combat. We now owe it to them to recognise this selflessness by saluting our forces and thanking them for their incredible bravery.”

Colonel Paul Hayhurst, Station Commander, Wattisham Flying Station said: “The support of the people of Suffolk to the Armed Forces community based in the county, be they regular, reserve, cadet or veteran is fantastic.”

The council’s website also includes stories from some of our county’s finest military heroes, from the Lord Lieutenant’s Army Cadet for Suffolk, to a busy mum of three who has been highly commended for her important role in the RAF. 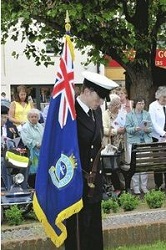 ARMED Forces Day was marked on Saturday morning as members of the public joined military veterans and cadets in Brentwood town centre. Workers, shoppers, families and… 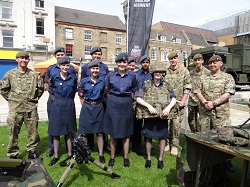