Chelmsford Army Reserve Centre have had brand new signs installed to coincide with the change of name and rebranding for The Territorial Army (TA).

Chelmsford Army Reserve Centre, located at Springfield Lyons, had the new signage installed last week which features a brand new design and a striking red colour. The Centre is base to 3rd Battalion The Royal Anglian Regiment, 3 (Essex and Hertfordshire) Coy 3 R Anglian and a troop of Royal Signals personnel from 36 (Essex Yeomanry) Signal Squadron.

It is also the headquarters of Essex Army Cadet Force. This rebranding is a new era for the Army Reserve Centre and is one of the most significant changes in the 100 year history of the formerly known Territorial Army.

Chelmsford Army Reserve Centre is one of the many centres in the East Anglian area involved in the name change, an exciting prospect which will better reflect the enhanced role of the Reserves and their full integration into the whole force.

The Army Reserves are now recruiting. With 16 Army Reserve Centres currently located throughout the East Anglian region, the Army Reserve offers the best of both worlds for those who want to experience Army life but do not wish to make a full-time commitment. 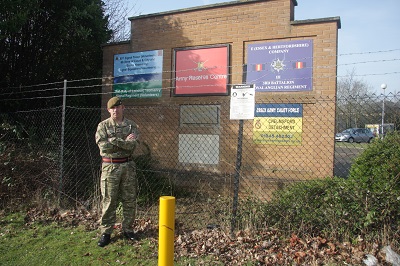 It is an exciting, challenging and rewarding opportunity and with training and regular exercises the Army Reserve will provide a range of valuable skills to benefit civilian life.

Nationwide, the Army Reserve makes up one quarter of the British Army and reservists routinely work side-by-side with their Regular counterparts. Over the past two decades Reservists have contributed to defensive, humanitarian and peacekeeping operations in Afghanistan, Bosnia, Kosovo, Sierra Leone and Iraq.

For the latest news and information you can visit our Twitter and Facebook page (East Anglia RFCA).