Capita was awarded a £495M contract for Army recruiting in 2012 but the British Army has not recruited the number of soldiers it requires in any year since the contract began.

The total shortfall each year ranged from 21% to 45% of the Army’s requirement. The Commons Defence committee was told in October that the army had 77,000 fully trained troops compared with a target of 82,500. The issue is compounded by the change in definition of ‘trained strength’ in June 2016 to include even personnel who have only completed Phase 1 basic training. 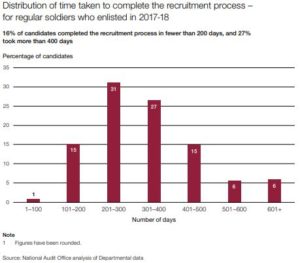 In the first six months of 2018-19, it was taking up to 400 days for applicants to go from initial application to basic training. Average Army recruiting times have not reduced since 2014-15.

The recruting partnership with Capita was meant to reduce the costs of recruiting by £267M, while at the same time recruiting more soldiers and officers. In 2012, the Army committed £1.36 billion over ten years to the project.

But according to the NAO’s investigation, the Ministry of Defence (MOD) didn’t provide Capita with the necessary IT infrastructure to enable Capita to carry out online recruitment. It passed responsibility for developing the online system to Capita in 2014, but the complexity of the Army’s requirements resulted in the online system launching over four years later than originally planned and at a cost of £113 million, triple its original budget.

So Capita now owns the online recruitment system, and after 2022, the MOD will have to negotiate a new support contract with Capita so it can continue to use the system. In parralel, the Army had optimistically reduced the number of local recruitment centres from 131 to 68 at the start of the project, as at the time, the Army considered planned roll-out of a centralised and online application process sufficient to make the recruitment centres redundant. 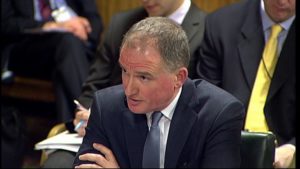 The latest Army recruitment campaign is part of the solution to address the Army’s ongoing recruitment problems. This latest NAO report follows up on issues identified in the Comptroller and Auditor General’s reports on Ensuring sufficient skilled military personnel and Army 2020.

Jonathan Lewis, Chief Executive of Capita, (picture courtesy of Parliament TV) told the committee that Capita is not proud of recruitment numbers and he claims improvements have been made: “I’d like to think that what has been done over the last year has addressed many of those issues.”

In 2018, the Army and Capita started to trial changing the order of the different stages of recruitment, streamlining processes and revising entry standards in order to reduce recruitment times and improve the conversion of applicants into new recruits. They aim to reduce recruitment times for regular soldiers to 109 days and reserve soldiers to 98 days. Capita also told the NAO that the new recruitment system is allowing candidates to do more online and progress their applications quicker, which is beginning to improve the flow of applicants through the process. Capita forecasts that it will achieve 58% of the Army’s inflow requirement for regulars by the end of 2018-19.

Defence Secretary Gavin Williamson responded to MPs concerns during a Select Committee hearing on 22nd January 2019 that Capita could lose the contract for missing Army recruitment targets. Mr Williamson said that the Ministry of Defence had undertaken work to look at the possibility of taking the contract back in-house and he added: “If it becomes apparent in the next financial year that Capita are continuing to fail in what they do, we are going to have to look at different options in terms of the contract.”

An increase in personnel leaving the Army accentuates the recruitment problems. The level of voluntary outflow increased from 3.8% in March 2010 to 5.6% in December 2017. The Department’s annual attitude surveys also show that satisfaction with pay, accommodation and life in the services has fallen. Programmes designed to improve retention, and make employment terms more attractive like the new pay model are expected to not affect many people and upcoming higher accommodation charges for regulars living in service family accommodation may have a negative effect on morale.

The RFCAs continue to provide value for money upkeep and upgrades to Army Reserve Centres across the country, in order to provide welcoming and fit-for-purpose facilities that aid retention. RFCAs also engage with local authorities, healthcare providers and employers to promote the value of military experience and ensure that Reservists, veterans and military families aren’t disadvantaged by their service under the Armed Forces Covenant.