Guests to Swaffham’s Army Reserve Centre were treated to an afternoon of military splendour when they attended a Drumhead service and parade on Saturday 25th January.

Soldiers from 677 (Suffolk and Norfolk Yeomanry) Squadron, 6 Army Air Corps, were on parade at Sporle Road to mark the relocation of their Flight.

With music from The Band of the Parachute Regiment, a Drumhead Service was held at midday followed by a short parade that saw the soldiers march out of the Army Reserve Centre for the final time. 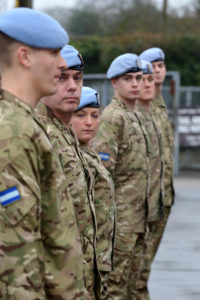 Captain Chris Tate from 677 (Suffolk and Norfolk Yeomanry) Squadron said: “The Army Reserve needed to be shaped to meet future challenges. Our soldiers realise that and although Saturday marked an end of an era here in Swaffham we look forward to the future and I know our soldiers remain committed to being part of the Army Reserve.”

He continued, “It is our people that are our most important asset. Considerable time and training is invested in our people to ensure that they are ready to fulfil their military role when required to do so. The move of our Swaffham Flight will ensure we continue to deliver effective and efficient training.”

The Suffolk and Norfolk Yeomanry were raised in that area in the 1890s. In 1915, the old TAVRA bought the site at Swaffham and then erected the current TA Centre. The Yeomanry subsequently changed to gunners and became 202 (Suffolk and Norfolk Yeomanry) Battery of 100 Regiment RA. Following a restructuring of the reserves, the gunners re-roled to Army Air Corps in 2006/2007.

The current policy is to concentrate the army reserves in to fewer but larger units in order to deliver more effective training, so the Swaffham Flight will now train with the Norwich flight at the Army Reserve Centre, Aylsham Road. They are about to take delivery of a multi million pound part task trainer, incorporating the wings and fuselage of an Apache, to practice the re-fuelling and re-arming skills they need to carry out their new role. 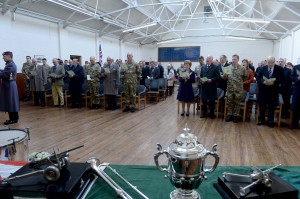 The Flight of around 20 soldiers will join with their sister Flight already in Norwich or their Squadron Headquarters based in Bury St Edmunds and the building will continue to be used by the Army Cadets.

The re-location comes as 6 Regiment Army Air Corps doubles in size from two Squadrons to four, two of which are based in and around East Anglia.

Formed in 2006, the regiment is an Army Reserve unit that provides essential ground crew to regular Army Air Corps units to keep aircraft operational irrespective of the conditions. The regiment has two Squadrons based in Bury St Edmunds; the HQ and 677 Squadron with detachments in Norwich and Ipswich.

Soldiers who join the Regiment will complete an Army aviation trade training course to equip them with the basic skills required to work with battlefield helicopters. This will include learning how to land Marshal aircrafts into a landing zone and refuel an Apache helicopter.

Find out more information about the opportunities in 6 Regiment Army Air Corps on their website or contact: 0845 600 8080.