Lowestoft Army Reserve Centre has brand new signs installed to coincide with the change of name and rebranding for The Territorial Army (TA).

Lowestoft Army Reserve Centre, located at St Peter’s Street has recently had the new signage installed which features a brand new design and a striking red colour. The Centre is home to a platoon of 3rd Battalion The Royal Anglian Regiment, 1 (Norfolk and Suffolk) Coy 3 R Anglian. 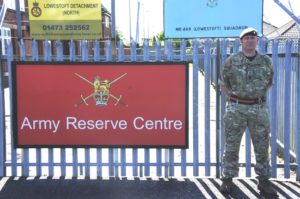 Lowestoft Army Reserve Centre is one of the many centres in the East Anglian area involved in the name change, an exciting prospect which will better reflect the enhanced role of the Reserves and their full integration into the whole force.

Get in touch…
If you are interested in joining as a Reservist or for more information about the Army Reserve in Lowestoft, contact PSAO Captain Thomas Steele, 1 (N&S) Coy 3 R Anglian on 01603 467658 or email 3ang-a-psao@mod.uk The contact number for the Lowestoft Army Reserve Centre 01502 572032.