On Tuesday 18th February work was finally completed to Bedford Army Cadet detachment and a successful handover was achieved.

The new cadet detachment is a modern facilities building and will include an improved parade ground for Bedford’s Army Cadets.

Situated in Kimbolton Road, Bedford, the Bedford Army Cadet detachment and the development of this scheme forges a closer relationship between the Cadet Force and former members of the Armed Forces; those who lived through World Wars and those who are now residents of BCHA, including one veteran who had joined up at the age of 11.

Agreements were made between Bedford Citizens Housing Association (BCHA), the House of Industry charity and Bedfordshire and Hertfordshire Army Cadet Force to make the build possible. 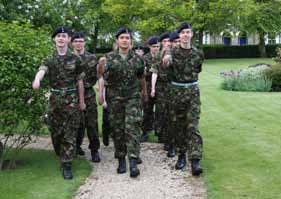 The Bedford Army Cadet detachment is now finished and Phase three construction of the residential care home and associated facilities is due for completion November 2014.

Major Tony Lloyd said: “As well as providing much-needed new facilities for our Cadets, it will improve the area, smartening up the neglected frontage onto Kimbolton Road.”

The building of the new cadet centre was project managed by Northstar Projects in conjunction with the Estates Department at East Anglia Reserve Forces and Cadets Association. Dalton Homes Ltd, an award-winning building contractor, were informed what was required from the building and the facilities were then created according to the brief under a fast track “design and build” construction process.

Work began on the development in September 2013 and the Bedford Cadet detachment features several classrooms, up-to-date facilities, a hall and new parade ground.

The new Bedford ACF building will be officially opened on Saturday 17th January 2015 at 11:00am with HM Lord-Lieutenant, Helen Nellis attending and officially opening the new hut. Keep an eye on our website nearer the time for more information.

If you are interested in joining as a cadet or for more information visit the Bedfordshire and Hertfordshire Army Cadet Force Headquarters at the Army Reserve Centre, 28 St Andrews Street, Hertford, Hertfordshire  SG14 1JA. Contact 01992 582423 or visit their website.

For more information on the Bedford Army Cadet detachment take a look at the Bedford Citizens Housing Association Magazine.

Find out more about our Estates and Supplies department here.