This is supposed to contribute half of the £10.6bn of planned savings in the Army budget over 10 years to 2022. The redundancies are the latest development in the ongoing cutbacks in staffing. Since 2011, 12,130 military personnel have been made redundant.

The National Audit Office (NAO) concluded that the MoD had seriously overestimated how much might be saved as well as the feasibility of restructuring the army. The MoD target is to bring the army down from 102,000 regular soldiers to 82,500 by 2018, and to fill part of the gap by raising the number of trained reservists from 19,000 to 30,000.

The heaviest criticism is over what the NAO sees as the MoD falling badly short of its recruitment targets, particularly much-needed reservists. Far from rising, the number has dropped by 10 in the past two years, from 19,410 to 19,400. 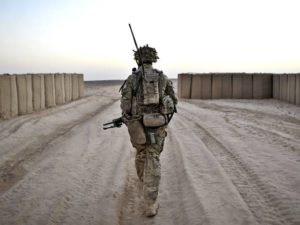 According to the NAO, the programme to reduce the size of the regular army and increase the number of trained reservists was taken without appropriate testing of its feasibility.

The NAO, which reports to parliament, said the new structure came with “significant risks” that, if they materialised, could significantly affect the army’s ability.

The NAO warned that, without a “significant change in performance”, the target might not be hit until 2025.

“The MoD has always been clear that the numbers in the reserves would fall before they increased, but we have now seen the trained strength of the reserves climb for the first time in nearly 20 years … While there is much still to do, we are confident of achieving the target of a 35,000 trained reserve by the end of financial year 2018.”