Forty four years after he began his Army career, Captain Alan Licence MBE has swapped his uniform for civilian clothes and marched off into a well-deserved retirement.

Alan joined the Army as a junior soldier at the Army Careers Office in Colchester in 1970. At the time Ted Heath was Prime Minister and a pint of milk cost 3 shillings.

Permanent Staff Administrative Officer at Colchester-based 161 Squadron, 254 Medical Regiment, Alan (59) was the first member of the Squadron when it was created in 2008.

Using his military experience he has built the Squadron up to what it is today; a 110-strong force that is the largest Squadron in the Regiment, ready and able to deploy on Operations alongside its fellow regulars.

The Regiment specialises in providing second-line medical support, responding quickly to incidents and treating casualties. It supplies healthcare professionals throughout the military, providing the highest standards of trauma and primary health care in the field. 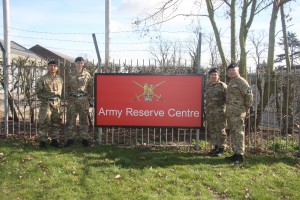 Prior to joining 254 Medical Regiment, Captain Licence served in a variety of roles at the Military Corrective Training Centre (MCTC) including the RSM (Regimental Sergeant Major) before commissioning as an Officer in 1991 into the Military Provost Staff Corps. He retired from the Regular Army as Deputy Commandant of the MCTC.

In 2003 he deployed on Op TELIC where he was responsible for all 124 Iraqi Police Stations in Southern Iraq, ensuring that all custodial facilities met the rigorous requirements of the International Committee of the Red Cross.

Alan said: “It has been an honour to work with the Army Reserves in this my final posting. They can be proud of their achievements and the job they have done supporting regular troops on operations and I wish them well for the future; they all have my total respect and admiration.”

Colonel Paul Tynan, Commanding Officer of 254 medical Regiment said: “Capt Alan Licence has made a huge contribution to both the Regular and Reserve Armies, through his long and distinguished service. In recent years, he has been the rock in 161 Squadron – driving recruitment, retention, enabling training and developing young soldiers.

He will leave a gap that cannot be easily filled. On behalf of 254 Medical Regiment, we all wish him the best in a long and happy retirement.”