4,000 people descend on Carver Barracks to enjoy an open day before a parade through the streets of Saffron Walden to commemorate the outbreak of the First World War.

From aerobatic pilots to night vision goggle mazes, fun for all ages was on offer at Carver Barracks in Saffron Walden over the weekend of 26th July. 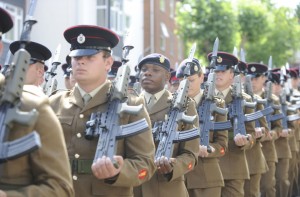 Captain Waj Khan, AGC(SPS) Detachment Commander at Carver Barracks, said: “It has been fantastic. The whole day was outstanding. People were absolutely captivated by the aerobatics display. I stopped driving when I heard the plan in the air to have a look myself.

For a few moments the camp was just stood still watching the pilot doing loop the loops and stalling the plane to drop out of the sky.It was pretty fantastic.” 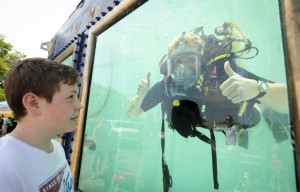 Along with plane demonstrations, visitors enjoyed a climbing wall, a military diving underwater demonstration, and a show by the Military Working Dogs.

Music filled the air around the barracks as local bands and the Military Wives Choir took to the stage to perform.

Capt Khan added: “Lots of people were enjoying the music and dancing and clapping along. With our younger guests, the climbing wall was very popular, as was the night view goggle obstacle course. The weather was outstanding for the entire day. We have been preparing for the past few months and it has been so successful.” 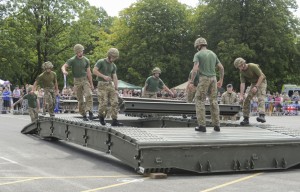 All profits raised will be donated to SSAFA –Lifelong support to our soldiers and their families.

The weekend activities were rounded off with a military parade through the streets of Saffron Walden.

Officers from 33 and 101 Regiment from Carver Barracks and the Band of Royal Engineers, alongside local branches of the Air Cadets and Royal British Legion, walked through the town to commemorate 100 years since the outbreak of the First World War. 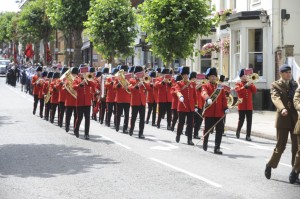 At midday, Rev David Tomlinson conducted a service in the square where the names of the fallen from Saffron Walden were read.

A total of 159 people from Saffron Walden lost their lives in the war.

Want to join?
If you would like to join 33 Engineer Regt as a Reservist and for further details call 01223 203600 or visit the MOD website to apply.