Rob joined the Ixworth Detachment in 1979. By the time he aged out in 1985, he had completed his Senior Cadet Instructor Cadre, rose to become a Cadet Sergeant, and made many good friends. 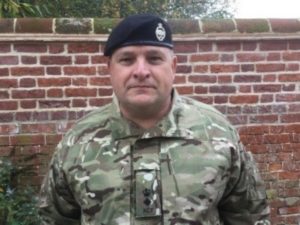 Twenty years later, in 2005, he re-joined the ACF as an adult volunteer and progressed onto becoming Deputy Commandant for the county. He still sees several of the friends he made as a cadet even now, as they are also instructors in the ACF.

He’s a keen walker who can be found both in the flatter lands of East Anglia, and also in the hills and national parks around the UK. Navigation and a love of the outdoors are examples where Lt Col Simpkin’s skills and interests have found an outlet in the ACF, through his role as county Duke of Edinburgh Awards Officer.

Rob has been able to offer his time because of the fantastic support he has always had from his family; including Helen, his wife, and Emily and Katie, his daughters. His daughters were also Suffolk ACF cadets for many years and have since moved on to careers inspired by their time in the organisation, including Emily being a Regular Army Officer and Katie being an Officer adult volunteer in Suffolk ACF.

Rob’s day job is as a Senior Project Manager in the building services industry. He commented: “The Army Cadet Force offers many exciting and challenging opportunities, for both young people and adult volunteers alike. I am proud to be part of such a fantastic organisation and would encourage anyone who has any spare time to volunteer with the Army Cadet Force.”