A Bedford Army Reservist leapt into action to chase a thief who fled through the town clutching two Poppy Day charity collection boxes on Remembrance Sunday.

Private Joseph Lionetti, 27, a member of 158 Regiment RLC (Royal Logistic Corps) had been at his family’s café, La Piazza Bedford, where he works as a barista, waiting to join a virtual Zoom Remembrance Sunday service with his unit when the drama unfolded on Sunday 8th November.

It began when he heard shouting coming from the street outside and saw a man running down the High Street with what looked like two charity boxes. He left the café with his father, a Special Constable, to investigate further.

Joseph said: “I was at the café with my dad when I heard someone shouting that someone had stolen a charity box, so me and dad left the café to investigate and then a member of the public said the man had gone down an alleyway, so I jumped a barrier separating the footpath from the road and made my way down there.

“My dad, who has a leg injury, took the long route around. About 100 metres down the road, I noticed a man holding two collection boxes and without drawing attention to myself, followed him for another 100 metres.

“Then another man, who had seen the theft and had followed me, shouted “that’s the man who stole the charity tins,” at which point the thief ran off, but I carried on chasing him and caught up with him on top of the Bedford Mound, where he had tried to hide himself.

“However, he wasn’t very well hidden so I went over to him and asked for the tins back. I think he was a bit startled and wasn’t expecting to see a man in military uniform – so I reassured him that all I wanted was the tins back – so he put them on the ground in front of me.

“By the time my dad was approaching, the man launched himself down the mound and ran off, and by the time I got there he had gone – so I took the boxes back to Tesco where they had been stolen from and then just made it back in time to take part in our Zoom Remembrance Service at 10.15am.”

Joseph said the thief may have decided the game was up, and that handing the boxes back was his only alternative as just 50 yards away, veterans had also begun gathering close to the war memorial in preparation for their own Remembrance Service.

He added: “It was quite funny as I’m quite a relaxed kind of person and was chatting to the thief who said he was a drug addict and just stole the charity boxes to buy drugs. But about 50 yards away there were some veterans congregating by the war memorial for their Remembrance Service – and if he’d ended up near them it might not have ended up all that well for him.” 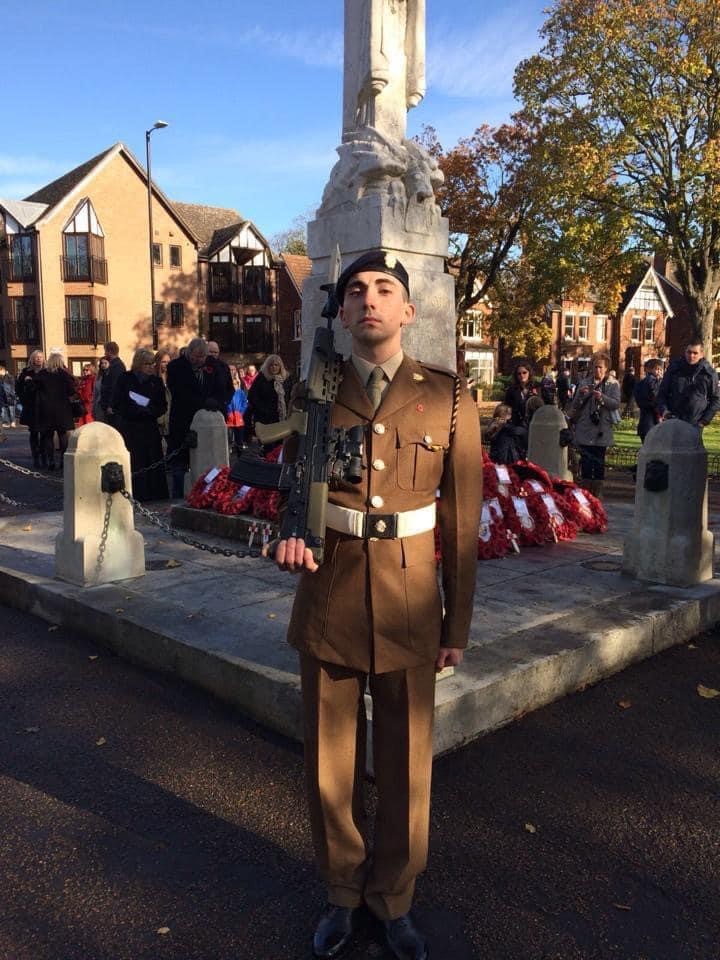 Private Lionetti, who works full time in his parent’s café as a Barrista, has served as an Army Reservist for six years.

From April to July this year, Jospeh joined troops at mobile testing units in Leicester carrying out Covid-19 testing in the town.

During his time as a reservist, he has deployed on overseas training exercises in Cyprus and NATO exercises in Belgium. He said that being a Reservist gives him the best of both worlds and allows him to do what he loves in both civvy street and the military.

He added: “My dad is a part time police officer and I decided I wanted to serve my community too and to have the opportunity to explore new stuff, so that’s why I joined in the first place. I tell people all the time about the opportunities in the Reserves.

“But, I am half Italian, and our family bonds are very strong. I love being a Barrista because you meet so many new people and I end up being a bit like a therapist for our customers – so I really do have the best of both worlds”

The CO of 158 Regt said:  “Pte Lionetti is an exemplar for the Army Reserves – he did the right thing in the right way, and 158 Regt RLC are enormously proud of him.  It is particularly pertinent at this time of Remembrance and highlights the selfless commitment that the RLC embodies.”

A spokesman for the RBL said: “We are very grateful to Private Joseph Lionetti for retrieving the Poppy Appeal tins and for his calm approach in such a situation.

“It is the first time in the history of the Poppy Appeal that our volunteers have been unable to carry out face to face collections anywhere across the UK and the loss of funds would deprive those in the Service and ex-Service community and their families of much needed assistance and support from the Legion.

“Therefore, every donation made and every poppy, especially in such a challenging year, makes a difference to the lives of our Armed Forces community.”

To make a donation to the Royal British legion Poppy Appeal, visit their website.