Army Cadet Force Volunteers (CFAV) interested in climbing the ranks of the ACF have to pass a Commissioning Board to gain Officer rank of 2nd Lieutenant. The Commissioning Board is widely considered a daunting challenge which puts off CFAV from applying. But in East Anglia, CFAV have a great programme that prepares them to succeed in achieving a Cadet Commission.

Experienced Officers mentor a dozen or so candidates over the course of a weekend. SI Vicky Houghton, Cambs ACF, attended the latest event in October at RAF Wyton. She said: “There was time to get to know other Potential Officers from across the region. We covered all aspects of the Commissioning Board including command tasks, presentation skills, report writing, aptitude testing and undertaking a PlanEx.” 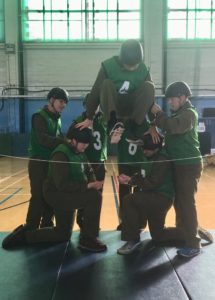 “The mixture of physical and mental effort was testing. The weekend proved to be a good way to understand what to expect at Westbury,” she added.

The candidates also heard about the Cadet Commission process from someone who recently went through it, Captain Steve Hudson, MSO Essex ACF. Mrs Janet Christian and Major Ian Ferguson, OC 3 Coy Beds & Herts ACF, delivered MAP revision. At the end of the weekend, full feedback was provided to candidates from CV preparation to individual performance.

Each year, about 150 CFAV nationally apply to the Cadet Force Commissioning Board (CFCB) and the successful candidates receive additional training and access to higher level qualifications through the Army Cadet Force. The Cadet Commission is required for CFAV wishing to take on the role of Company Commander and above.

The Pre-CFCB weekend was instigated by Col Iain MacDonald, Comdt Essex ACF, ten years ago and the event has evolved into a regional programme which runs twice a year in partnership with East Midlands RFCA. Col MacDonald said “The number of candidates subsequently passing CFCB Westbury continues to underline that this programme works well.”

Maj (Ret’d) Jane Wilkes, Deputy Chief Executive of East Anglia RFCA, attending the weekend as one of the 10 training officers, commented: “Individuals should not be timid in stepping forward and aspiring for a Cadet Commission in the Army Cadet Force.”

CFAV interested in commissioning are encouraged to speak to their ACF Chain of Command to secure a place on the next pre-CFCB weekend from 10th to 12th May at Chetwyn Barracks.