The Mayor of Watton, Councillor Beryl Bunning, ceremoniously laid earth into the hole dug for a time capsule prepared by the Watton cadets for the occasion.

The time capsule contains records collated by the cadets spanning 20 years, including brassards and the latest Watton Times newspaper.

Both cadet organisations have a long history in the Norfolk town, but this is the first time they will share a building. East Anglia Reserve Forces and Cadets Association led the project to enable the Army Cadets to share digs with the Air Cadets. The project delivers much improved facilities for both units: the existing Air Cadets’ building has nearly doubled in size, and has been fully refurbished in the process.

The building bears a plaque commemorating the move, unveiled by the Mayor during the inauguration. Councillor Bunning and other guests visited the cadet activity stands, from parachuting to Corps of Drums and First Aid. 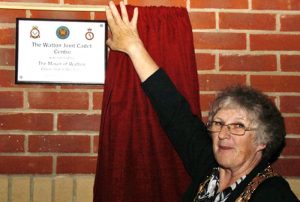 Some Cadets received their Gold Duke of Edinburgh awards & 4-star Certificates from the Mayor that evening in front of friends and family. 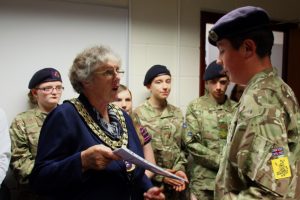 The Army Cadet Centre on Church Walk will be sold in due course. So from now on, people interested in becoming Watton cadets or instructors will need to look for them at the Joint Cadet Centre on Elworthy Close, off Portal Avenue.

The Army Cadet Troop, who are affiliated to the Household Calvary Mounted Regiment, meet on Tuesday evenings at 7pm.

844 (Watton) Squadron of the Air Training Corps meet at 7pm on Monday and Wednesday evenings.