The Army cadet hut in Lower Park Road, Brightlingsea, was shut down this month after a series of acts of vandalism forced the cadets to move to a different location.

In recent years, the buildings in Lower Park Road, Brightlingsea, have been subjected to repeated and varied acts of vandalism, ranging from a fire to graffiti and attempts at forced entry through the wood-cladded walls of the Cadets’ building.

Despite several attempts to repair and prevent further damage, the Cadet site continued to be affected, so for the safety & comfort of the Army Cadets and the volunteer instructors who train them each week, the decision was made to re-locate the cadets to a better venue. 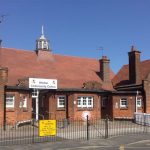 East Anglia RFCA is responsible for maintaining safe and compliant buildings for Reserves Forces and Cadets, on behalf of the Ministry of Defence. Of primary importance is ensuring every site meets the required legal standard, ensuring that all sites are kept in good condition, fit for purpose and secure.

Jon Lawes, Head of Estates at East Anglia RFCA, said: “We carry out several re-locations each year, balancing demand with the desire to provide safe and attractive facilities for Cadets, their Instructors, and with available resources.”

Happily, 12-18 year olds in Walton now have on their doorstep an opportunity to join a national youth organisation that promises challenges and adventures that could transform their lives. Find out more about where our Estates team provide safe places for Reserves and Cadets to train in over 190 locations in East Anglia.