The University of Northampton’s Institute for Social Innovation and Impact has published its second interim report on the positive impact of the Cadet Forces on society.

Two years into a four-year study, this report makes recommendations based on about 4,000 surveys of cadets, Cadet Force Adult Volunteers (CFAV) and headteachers.

The section on Education, particularly the views of school stakeholders and Ofsted, stands out. Key recommendations include: 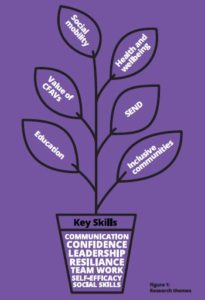 All the headteachers surveyed said that they hoped to improve a range of areas by establishing a CCF contingent in their schools, including: student resilience, enrichment opportunities, leadership, teamwork, attendance, behaviour, and communication skills – and to reduce exclusions.

There has been a 40% increase in school exclusion figures in the last three years, and the financial impact to the taxpayer is estimated at £370,000 per young person by a recent IPPR report in lifetime education, benefits, healthcare and criminal justice costs.

The evidence collected so far indicates that Heads have seen improvements from having a CCF, and some Ofsted reports are now also commenting on the CCF as part of their inspection.

The report notes that Ofsted reports rarely mention if a school has a CCF unit, and those that do describe it as another extra-curricular activity. That’s because currently, Ofsted guidance advises inspectors that they are not expected to mention a cadet unit every time there is one.

School staff and CFAVs also reported the positive impact of the Cadet Forces on the young people they support, both in school and with their personal development. Mental and physical health were two significant areas that were linked to the positive impact of the Cadet Forces by many research participants. The researchers surmised that: “In an era of increasing loneliness and with mental health issues and obesity on the rise, impacts such as these can be life changing and help reduce state spending.”

The report also highlighted the latest national numbers of CFAV and cadets:

The report praises the CFAV contribution through their volunteering, and hails them the ‘lifeblood’ of the Cadet Forces. CFAV responded in the survey that volunteering has a positive impact on them, although their views on other areas such as stress and the impact on career prospects were less positive. The researchers recommend that the benefits that adults get from becoming CFAV should be better communicated to help attract new volunteers.

You can read the full report here. Future reports will include insights on the financial savings to the Defence budget from cadets joining the Armed Forces, the benefit of the qualifications provided by CVQO, the relationship between school attendance, attainment and CCFs and an in-depth investigation into the value to employers of the skills and competencies that cadets gain.