Crusader 80, Britain’s biggest military exercise since the end of the second world war took place forty years ago in September 1980.

10,000 Regular and 20,000 Territorial soldiers moved from the UK mainland to reinforce the British Army of the Rhine (BAOR) in a show of strength during this Cold War period. 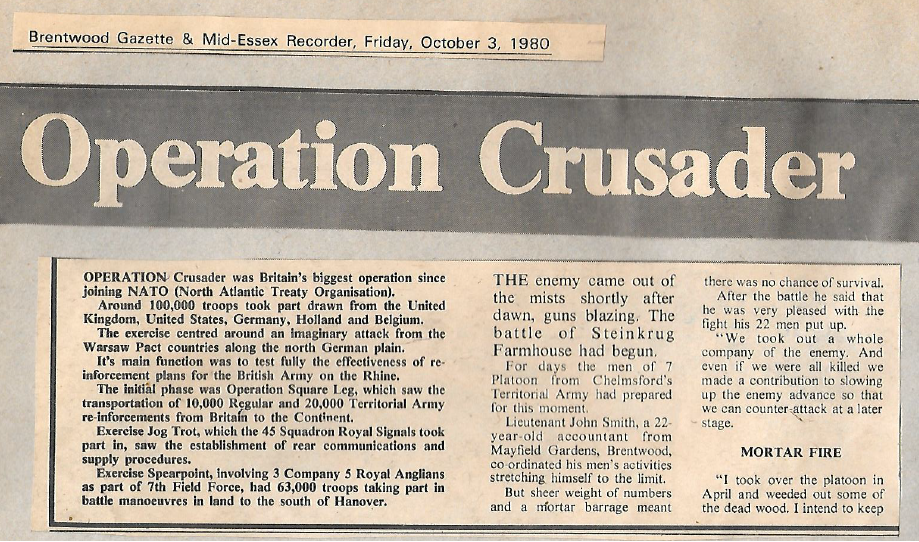 This huge NATO exercise included troops from Germany, Holland, Belgium, Canada and the United States. The US 82nd Airborne Division flew directly in from the USA and parachuted straight in to seize bridgeheads.

The permanent British barracks in BAOR were linked by a network of trunk cables and secure STARRNET microwave masts (STAtic Radio Relay NETWORK). The regular Signal Regiments based in BAOR would despatch their trunk nodes out into the field to link the deployed formation HQs back into the permanent system.

The role of 12 Signal Brigade, with its three TA signal regiments (34(Northern), 36 (Eastern) and 40 (Northern Ireland)), was to add a further six trunk nodes to provide resilience.

36 Signal Regiment was equipped at that time with C41/R222 radio sets, T100 teleprinters and 1+4 modems mounted in fishfryer trailers. This was old valve and crystal technology that was labour intensive and required a high degree of technician and operator skill. The HF net was C11s, plus each troop had Pye radios for local convoy control.

The regiment was predominantly Land Rover borne, with a few 4 tonners for stores, making it much easier to fully crew vehicles with 2 x drivers.

With more personnel than spaces in the vehicles, 36 Signal Regiment’s air party were taken by coach to Brize Norton then processed through the RAF system, along with thousands of other reinforcements.

The road party drove from their TA Centres across Eastern England to a staging point at St Martins Plain before joining the queues of military vehicles being managed by the Movers onto the requisitioned cross channel ferries. Huge convoys set off eastwards shepherded by Belgian, then German, police on motorcycles. The autobahns were simply never ending green snakes for as far as the eye could see.

Everyone went through a staging area at Leuth on the German border, where vehicles were refuelled, personnel fed and some rest was possible for drivers.

Despite best efforts, every troop managed to either lose a vehicle or gain a few extra vehicles from another unit. Drivers doggedly followed whatever green vehicle was in front of them, and some took a while to find their true locations.

As the exercise progressed, some German roads were closed to local traffic. With a battle expected around Hamlyn the local police were anxious that tanks and rush hour traffic should not mix. The Exercise Crusader Ops cell sent out the following telex:

The 20 personnel of 750 Signal Troop from Ilford were tasked to provide a communications centre for 205 (Glasgow) Field Hospital TA.

The communications centre was created in a disused building in Dortmund, using medical and dental equipment that had been in the stockpiled PUE (Palletised Unit Equipment) in Germany since the end of WW2. Looking at the 1950s style dental chair and instruments, there was no appetite to ask for a free check up!

Lines were laid out to provide a telephone in each ward and the message centre was set up ready to handle the medical staff’s handwritten messages and transcribe them onto the secure telex system.

Incoming messages were printed out for despatch. The manual switchboard was kept very busy by the hospital. Outgoing connections were made via a Bundespost line and a radio relay shot, thus providing secure comms back into the British network. 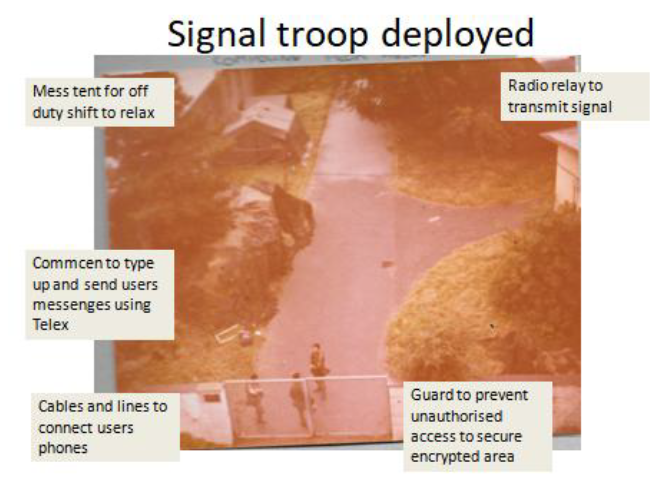 The troop guarded its own compound to protect the integrity of the encryption. Back in those days the encryption was created by physically cross wiring plugs and sockets on a small circuit board following the daily SECRET code matrix. It resembled scrambled knitting, and was easy for a plug not to be seated correctly or misplaced, so it was common for the entire network to go down for an hour or so at midnight when the key change occurred until the faulty “biscuit” was identified and rectified.

The Essex soldiers were quite shocked at the behaviour of some of the Scots in the Field Hospital, including fights in the female rooms, and every morning there was a queue awaiting discipline outside the medic RSM’s door. On the other hand, soldier humour is a universal commodity, and the field hospital had its own morale boosting publications. There was considerable press coverage of the exercise, both back in UK and in special “Spearpoint News”. 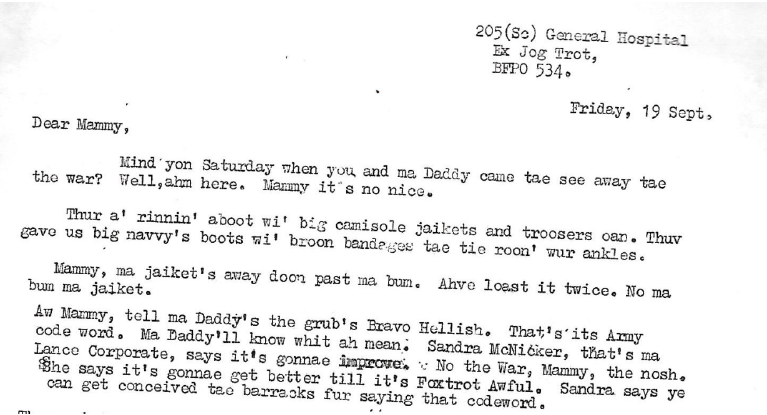 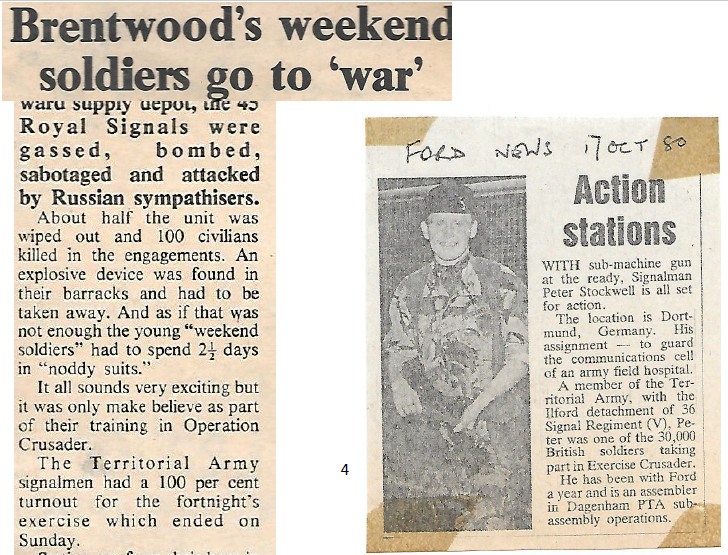 For the signal troops, it was an opportunity to serve real customers who required real communications in real time or even quicker, and many lessons on customer relations and managing the staff were learned.

The awe-inspiring scale of the mobilisation and the effective logistical management of so many vehicles, planes, ships and people was impressive.

Inevitably the “exciting” battles with planes, helicopters, tanks and infantry were miles away and our only knowledge came from the daily Intsums on the Telex. Equally inevitably, once the hospital or logistic unit was settled and its comms had been supplied, the routine of shift working took over and the action was limited, although rumours of saboteurs and terrorists were stoked up to keep troops on their toes.

All personnel were briefed on the very real likelihood of seeing the Russian SOXMIS spying on the exercise, and everyone was issued with a pocket card giving instructions to dial Herford 2222 to report any such sightings. We didn’t see them on this deployment, but a few years later they came sniffing round a trunk node site in a wood, to be chased off by the squadron cook.

The exercise was repeated on a slightly smaller scale four years later with LIONHEART 84. 36 Signal Regiment continued to deploy to Germany to practice its cold war role every other year, and over two decades operated from sites close to the Inner German border, throughout the Ruhr valley, Belgium, the Ardennes, and the Channel ports.
Would all these elaborate Cold War plans have stood up to reality? They were certainly taken seriously, all troops had their BAOR map packs, considerable knowledge of their key locations and knew how to get there. Who knows if we could have held back the Russian hordes? Luckily the Berlin wall came down and we never had to find out.