As the world prepared to mark the centenary of the war that changed all wars, volunteers who served in a much more recent conflict have been honoured at a special ceremony in their home town.

On Sunday 3rd August, reservists of 202 (Transport) Squadron, 158 R.A Transport Regiment, Royal Logistics Corp which is based at Yarmouth Road in Ipswich, marched past Mayor of Ipswich Cllr Bill Quinton and his deputy Hamil Clarke in Christchurch Park before receiving medals for their service.

They have recently returned from Afghanistan where they were involved in the operation to close down British Army Forward Operating Bases (FOBs) in the run-up to the withdrawal of British combat troops at the end of this year. 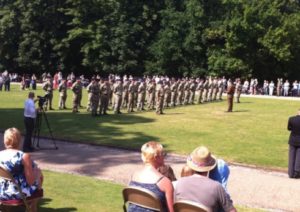 Many of the Army Reservists had served more than one tour in Afghanistan over the last eight years – but they were aware that this was almost certainly their last visit to the country.

For Sgt Daniel Coote from east Ipswich, this was his fourth trip to a conflict zone; he had been once to Iraq and to Afghanistan three times.

He said: “Things have changed considerably. When we first went there in 2006 it was all dusty roads and desert tracks. Now we were using proper roads that we had made.”

For Lance Corporal Kirk Dixon from the Chantry estate it was his first trip, but it was sandwiched between two rather different security jobs.

He arrived on the parade ground after coming down from Glasgow where he had been part of the security team for the Commonwealth Games – a role he also fulfilled during the Olympics two years ago.

Cpl Dixon said: “I was doing security checks on vehicles at the Olympics, and doing a similar kind of thing in Afghanistan. I’ve been doing that in Glasgow as well.” 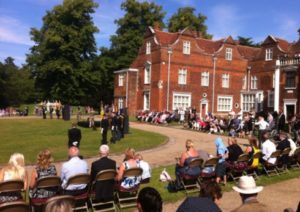 Commanding officer Lt Col Michael Hughes said: “It is an occasion to join with the people of Ipswich to celebrate the contribution of our soldiers to operations in Afghanistan, both those recently returned and all who have deployed since 2002.

They have all served with a commitment and professionalism that has made them indistinguishable from their regular colleagues and should be rightly proud of their contribution.”

He said it was possible to draw parallels between today’s soldiers and those who signed up for the Great War 100 years ago.