He and a committee of stalwart local people have raised funds to erect a war memorial in their village of Capel St Mary, one of the few British villages to not have a war memorial already.

Carefully dropped into place last week, the memorial site will now be landscaped and an official dedication ceremony will take place on Armistice Day.

The village lost 33 men in the two world wars and you can find out more and donate at www.capelmemorial.org.uk. 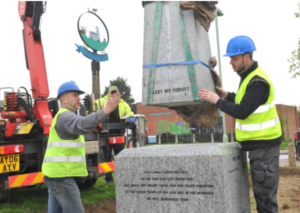 Gary adds: “Until the Dedication, the monument and memorial garden will be enclosed in boarding to be painted with murals by East Bergholt High School students.”

The Chaplain from Ipswich hospital, Major Mandy Reynolds (Ret’d) will lead the service at the dedication ceremony. She is the Chaplain to the Normandy veterans (her father landed at Normandy) and conducts the Dover service for the Merchant Navy.

Gary is the Selected Air Member of the Reserve Forces and Cadets Association for Suffolk, one of 167 voluntary members in East Anglia who interface with the local community and act as local ambassadors across the range of RFCA interests.