During September, local employers had the opportunity to join their reservist employees on foreign training exercises and see them in action.

These unique visits give employers an insight into reservist life so they can better understand their employees skills set and comprehend why it’s essential to offer flexibility and additional support to them so they can fulfil their reservist commitments.

254 Medical Regiment, which has its Headquarters in Cherry Hinton, Cambridge spent two weeks weeks on Exercise Sava Star; living and working alongside 50 Croatian soldiers on the Crvena Zemlja training area in Knin, Croatia. 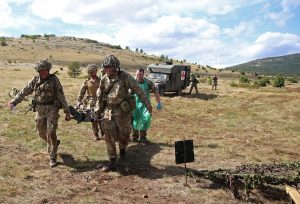 Luton & Dunstable Hospital NHA Foundation Trust, Cambridge & Peterborough NHS Foundation, East & North Hertforshire NHS Trust, Colchester & Ipswich NHS Trust, Skillforce and Medway Community Healthcare all flew out to Croatia.  They joined 254 Medical Regiment for a long weekend to witness some 110 Army Reservists, the majority of whom are professional clinicians with jobs in the NHS and other parts of the medical community across the South East of England, completed a series of military training packages. The aim of the exercise was to ensure the Reservists are competent and confident in their core medical and military skills and to link the reservists training with that of other NATO forces to ensure the best tactics and techniques are shared between nations.

One of them, Sharon Johnson, the Service Manager for the First Response Service and the Integrated Mental Health Team at Cambridgeshire and Peterborough NHS Foundation Trust was there to see her employee Corporal Nick Johnson.

Sharon said: “I had a general idea of the role of an Army Reserve medic before I arrived but it was just great to see them actually training. They do such a great job and it needs to be encouraged.”

Sharon also acted as one of the 75 casualties the medics had to treat over the course of the final four-day exercise.

“It’s so different from what Nick originally trained for as a mental health nurse, but the training opportunities it offers will help him back in the civilian workplace.” 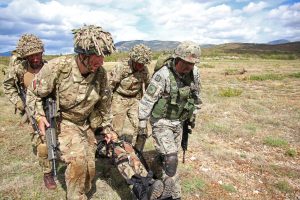 Corporal Nick Johnson (23) said: ”I’ve been in the Army Reserve around two and a half years as I wanted to challenge myself and learn new skills. It also gave me the opportunity to become involved in emergency care.

“I suggested that Sharon came out to visit. I thought it would be nice for her to see what I do first hand. I just wasn’t expecting her to be a casualty!” 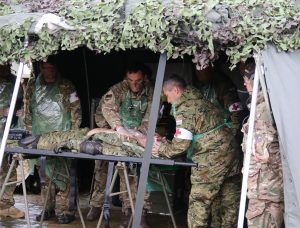 A day later a different group of employers, including Stansted Airport and Levertech Aviation Services journeyed to Cyprus to join 3 Royal Anglian Regiment, who are headquartered in Bury St Edmunds, Suffolk for their overseas training exercise. 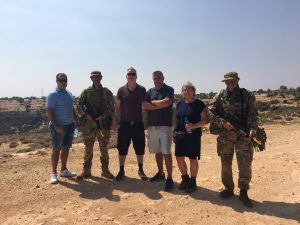 Exercise Lion Star, based at Episkopi Garrison, was a two-week challenging field exercise, utilising the austere environment that Cyprus offers. The exercise built upon the training progression during the training year, specifically focusing on command and leadership. 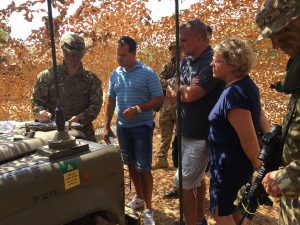 Employers visited a transit camp (Bloodhound Camp), witnessed troops training in the field and were given first hand insight into some of the training exercises.

Due to the intense afternoon heat, exercises were moved to late evening. One evening they saw troops handle the clearance of a village, sweeping through the terrain to flush and out capture the enemy. They then returned to the village the next morning to learn step-by-step how the exercise was conducted. General Crackett gave a talk to employers about how important their support is to  serving reservists and fielded a Q and A session.

The greatest shock to the system was being woken up at 3am to watch a dawn assault on a water dam and again clear the enemy. Normal service resumed when they could tuck into a cooked breakfast post exercise out in the field and watch the Padre conduct a drum head service on the dam. 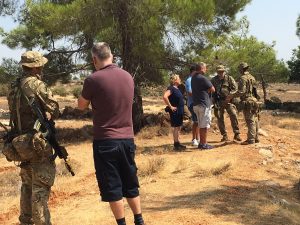