After 6 months’ closure, the Cromer Army Cadet detachment is once again open to young people and adult volunteers.

While the building remained in use by the RAF Air Cadets 1895 (Cromer) Squadron, a lack of instructors for the Army Cadets in Cromer meant the unit could not function. 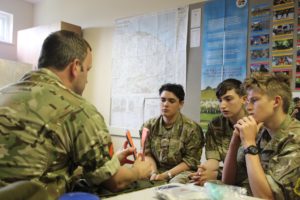 Colonel Malin was full of enthusiasm for the future of Norfolk ACF: “”Norfolk Army Cadet Force is back in the ascendency! I feel both proud and lucky to have been given the opportunity to head up such a vibrant organisation and look forward to working with the team to build on our recent successes.”

He added: “In the past 6 months, we have opened a new cadet hut in Norwich, relocated the Sandringham Detachment to Hunstanton, won the ACF Cup at this year’s Combat Cadet and the latest success is the re-opening of Cromer Detachment.”

And there was plenty to see and do at the opening event, with potential recruits invited to come and see what the Army Cadets is all about, including drill demonstrations, CVQO information, First Aid simulations and fieldcraft. The event was promoted locally with a specially-produced video.

Cromer isn’t the only Norfolk seaside town to have opened its doors for the Army Cadets; a unit has also opened in Hunstaton, in the large Community Centre which is perfect for the cadets to train in. That detachment moved from Sandringham, Dersingham via Snettisham before finding a more permanent home in Hunstanton, which can serve the surrounding rural area. 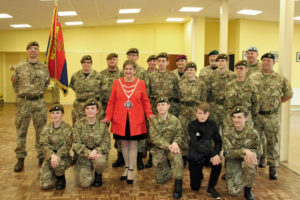 The Hunstanton open evening was attended by former Cadets and instructors from the area, parents of cadets and also those thinking of joining. Guest of honour was the Mayor of Hunstanton, Clr. Amanda Bosworth.

Norfolk Army Cadet Force is home to over 550 cadets and 155 adult volunteers in 24 detachments. Week in week out all over the country, instructors help the cadets learn new skills and develop personal attributes with fun and challenging experiences.

All cadet instructors are rewarded with training, personal development, an enhanced CV and immense satisfaction from enriching young people’s lives. 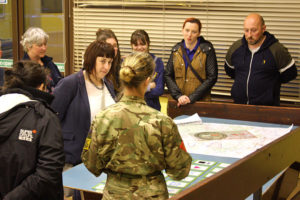 Cadet instructors can achieve qualifications in First Aid, diplomas and graduate level qualifications as well as training in all the activities that cadets take part in.

East Anglia RFCA staff are in charge of the day-to-day running of the Army Cadet Forces across the country, including processing new applications from potential volunteers and supporting all the cadet instructors.

To find out more about volunteering with the ACF, visit armycadets.com.