Army Media and Communications (AMC) won Government Communication Service’s (GCS) ‘Campaign of the Month’ award in February for their campaign encouraging young people to consider a career in the Army.

The AMC team timed their campaign to coincide with two Army TV documentaries and the launch of the Your Army 19 recruiting campaign.

in January 2019, ITV produced “The Paras, Men of War” and Channel 5 produced the second series of “Raw Recruits, Squaddies at 16”. Army Media and Communications designed and delivered a “social media wrap” which advertised the documentaries, engaged with the viewers, encouraged them to find out more about Army careers and showed them how to apply.

To reach Gatekeepers, they selected Facebook as their main communications platform. Generation X spend more time per week on social media than other age ranges, with Facebook being their most preferred channel. Furthermore, they knew that 66% of the British Army Facebook audience are over 34.

To reach the 16-17 year olds, they opted to communicate through Instagram. Instagram is considered generations Z’s most important social media channel.

Their aim: For young people to watch an episode of the documentaries, identify with the characters in the documentaries, link it to the Your Army 19 recruiting campaign (adverts on television, radio, billboards, SM) and then apply to join the Army.

The Army Media and Communications team working on this campaign used Instagram Stories to host Q&A sessions with personalities from the TV series, so viewers could engage with them after the episodes and be inspired to consider an Army career.

Facebook posts such as this one and Facebook  Live Q&A sessions were delivered to engage with gatekeepers. As the episodes were broadcast, Army Media and Communications tweeted providing more information about the topic shown on the television. 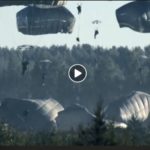 Among the AMC team behind the campaign was Media Ops Information Officer Gareth Palmer based in Merville Barracks, Colchester. Follow @16AirAssualtBrigade on Facebook to see their latest news.

And read more about this award-winning campaign on the GCS News page.