Training is at the heart of the Army Reserves and the four-week residential course sees the recruits learn the basics of being a soldier. The Challenge East Exercise is one of five similar Consolidated Army Reserve Phase 1 Training courses taking place across the UK.

The first phase of the course was delivered by Army Training Unit (East) at Prince William of Gloucester Barracks in Grantham. There they taught the basics of soldiering including drill, values and standards of the British Army and weapon handling. Other elements included first aid and how to live in the field.

The recruits are now in the final stage of their training at ATR Pirbright and will take part in their Pass Off Parade on the 15th August in Pirbright, before returning to the Regiment that they have chosen to join. 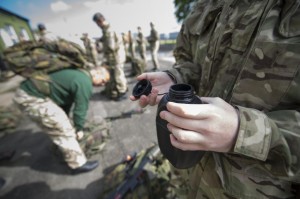 Bruce Janes, aged 33, from Cambridge is one of three recruits that has decided to join 158 Transport Regiment RLC. A Logistics Driver in his civilian job he said: “I’ve basically wanted to do this since I was young.  I’ve had lots of jobs, but never fulfilled my dream of being a soldier. I spoke to my partner (Kallie) and looked into it because it’s something I really wanted to do.”

He continued: “I’m absolutely loving it. It’s amazing My fitness has increased and I have a better frame of mind.  I have enjoyed doing the field craft and weapons handling.”

Lewis Mark, aged 20, from Northampton will be joining 3 Royal Anglian Regiment. An NHS Administrator he said; “I’d always been interested in the military. I wanted to see what it was about and push myself. I love being outside. The first night I thought about giving up, I don’t think I had mentally prepared, but the next day that feeling had disappeared. I’ve enjoyed it all, particularly the weapons handling.”

He continued: “My employers are very supportive; I asked for the time to do the training and whilst some of it I’ve taken as unpaid leave it wasn’t a problem getting the time off. It’s a great course and all the training is falling into place and it’s all coming together for me.”

All Army Reserves get paid for each quarter day of training. The pay scale is based on what a Regular soldier with the same job and rank would receive.  All pay is increased as a soldier gains promotion and experience. There are also subsidies that will pay for food whilst a soldier is away on duty.

Major Robert Graham who is responsible for Recruiting and Engagement across the East Midlands and East Anglia for 49 (East) Brigade said: “Due to the nature of the Army Reserve training is conducted on a part-time modular basis, and so it can take time for a new recruit to complete his or her basic soldiering course. Challenge East, being a consolidated course, has overcome that obstacle by delivering the training in a four-week block. It is challenging and the new recruits will learn much about themselves and develop some very useful skills. They can use these skills, not only within their personal life but with these new acquired skills, they are a more valuable asset to their employer.”

He continued: “The Army Reserve is the ideal option for those people who find the Army life appealing, but who are unable to commit to it full time. It offers the opportunity to learn a wide range of valuable skills, improve their employability skills and personal development while having the opportunity to meet new people and develop personal fitness and robustness.”

Once the recruits have complete their four week training course they will then train with their chosen unit one evening a week and one weekend a month. All trained members of the Army Reserve are liable for deployment on operations.

For further information on Army Reserve units across the East Midlands and East Anglia visit the army web at www.army.mod.uk or visit your local Army Careers office.