Lt Col Brown is now being posted to Africa. He said about his time at 6AAC: “In my 2 ½ years Commanding 6 Regiment Army Air Corps, it has been my privilege to meet and work with a broad section of Suffolk’s society and employers.  I have been overwhelmed by their amazing support for the military, whether Regular, Reserve, Veterans or their families.  I am also immensely proud of my Soldiers and Officers for their conduct and the superb support to the Apache, Wildcat and support helicopters from the Joint Helicopter Command.”

6 Regiment Army Air Corps is the appointed Armed Forces unit on Community Engagement in Suffolk and recently organised the Military Village at the Suffolk Show. Reservists from that unit also ran a free military-style leadership training day for employers to send staff they want to shape into Future Leaders.

Delegates can discover Leadership Theory and Leadership in Practice, in the way the British Army Reserve Forces teaches Leadership. The course is delivered by selected Army Officers, and consists of interactive and engaging sessions in the classroom followed by fun, practical leadership tasks outdoors with a flavour of competition and team building. 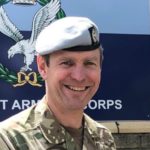 Lieutenant Colonel Jon Lowe moves from the Ministry of Defence in London to this new appointment.

Jon said: ‘It is a privilege and an honour to take over Command of the Regiment, and I hope to build on Marcus’ terrific work.  The support the Regiment has received from the people of Suffolk has always been tremendous, and I look forward to maintaining that strong bond with the county.’

Jon, along with all the other Commanding Officers of Reserve units based in the Suffolk, becomes an ex officio member of the RFCA and will sit on the East Anglia RFCA county forum which meets twice a year to look at the well-being of Reserve Forces and Cadet Forces in the county.