Echoing the concensus amongst those who attended the Martlesham Village Fete this year, Parish Council Chairman Mike Irwin said the example of the young men and women in the cadets was reassuring for the future.

“Many older people tend to grumble about the younger generation,” but “the Army Cadets stood out for their hard work and helpfulness all day – they were superb!”, Irwin said.

The Kesgrave Army cadets managed traffic and car parking, assisted stall holders and gave reliable advice to all who attended.

In recognition of their contribution, the Parish Council awarded them a Certificate of Appreciation and a contribution towards their cadet funds.

Sergeant Instructor Keiran Garrod, their Detachment Commander, received the certificate on behalf of the cadets and said that participating in community service was a key feature of the work of the cadets.

Many people think that there’s been a reduction in values and standards in society and a decline in ‘community spirit’ – particularly among young people. However, cadets are helping to change that view – by setting up or taking part in valuable community projects around the UK.

Army Cadet Force detachments have such a firm belief in giving back to their local areas that part of the cadet training programme is titled “Cadet and the Community”. This programme encourages cadets to participate in local events and helps them to become good citizens – with the values, attitudes and skills to build strong families, support their communities and go further in life.

12th to 16th November 2018 is #iwill week, a call to action to young people and those in the communities they’ve helped to describe the positive impact young people are having on their communities. 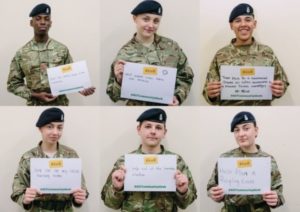 Led by the Department for Digital, Culture, Media & Sport, the campaign has been running since 2013 and aims to encourage more business, education, public and voluntary sector organisations to recognise the capacity of young people to make a difference, and open up opportunities for young people to participate in community activities on a large scale.

Without adult volunteers many of the Cadet Forces‘ and other youth organisations’ community activities could not take place. Volunteers organise the activities for the cadets, as well as taking part themselves, and they set a good example to cadets, showing how volunteering and community service is something which can continue throughout life.

If you would like to help young people make a real difference to your local community, find out how to get involved through #iwill.

If you know a young or adult volunteer who has made an outstanding change in your community, nominate them for a Points of Light Award by email to the Prime Minister’s office.