The report concludes that the British Army, which costs the taxpayer £11 billion per year, offers a yield on investment that extends beyond its core purpose of protecting the UK.  While the study falls just short of quantifying that yield, because successfully deterring threats means that those threats do not materialise, or at least that their impact is minimised.

The Army actively maintains a preparedness to act and constantly seeks to reinforce its reputation to deter. The report describes the added value from soldiers routinely deployed in a quarter of the world’s countries, projecting influence. It highlights that the British Army injects money and creates jobs nationwide, including in the country’s most deprived areas. The report notes the Army’s contribution to UK culture and the enhancement of the natural environment as important benefits, noting that the Army’s training estate covers almost 2% of the UK. 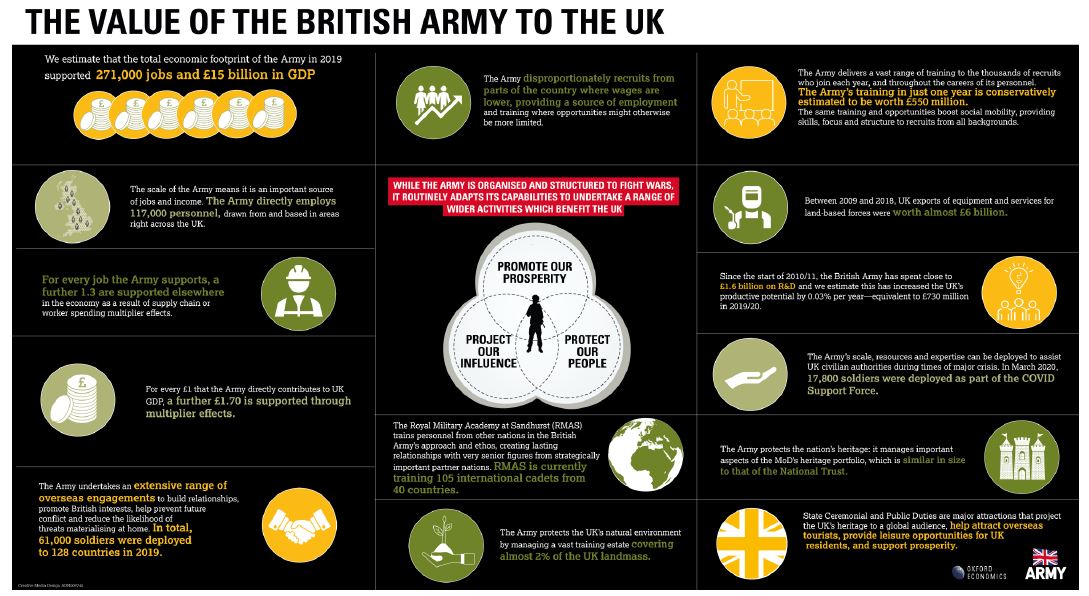 The report also highlights reservists applying skills gained in the Army to civilian roles, young people gaining skills in the Army Cadet Force and cadet instructors transferring skills they developed in the Cadet Forces to everyday life as examples of the value the Army adds to society and the economy.

The report notes that in 2019, the Army had 30,000 volunteer reserve soldiers who work part-time as soldiers alongside full-time 79,000 regular army service personnel. The  reservists were organised into more than 100 different units in 340 locations across the UK. The Army counts a further 27,000 regular reserve soldiers who have left their roles in the regular Army but can be recalled in times of need. The report cites these examples of the wider value of reservists:

“The operational experience acquired by the UK Defence Medical Services in Iraq and Afghanistan has been put to use in England’s network of Major Trauma Centres (MTCs). As part of the Army medical services Reserves from 2003 to 2020, Simon Davies was first deployed in Iraq in 2004 and undertook Full Time Reserve Service between 2005 and 2011, a period during which he served in Afghanistan on four occasions. During his service in Iraq and in Afghanistan, Simon gained considerable experience with the novel approaches used by the Army to treat complex injuries. Simon returned to the NHS in 2012 as the Major Trauma co-ordinator at the MTC of the Royal Stoke University Hospital. At the time, the centre was part of a network of similar MTCs being established across England. The expertise Simon gained during his service contributed to the development of the new working practices used by the hospital’s emergency department. In 2017, the hospital was awarded the Silver Award in the MOD / NHS Employer recognition scheme and, in 2019, it received the Gold Award.”

“Staff Sergeant Millington’s experiences as an IT specialist in Afghanistan and during the Commonwealth Games helped him secure a role as an IT manager for the NHS.”

“Squadron Sergeant Major Hallewell works in a construction products business and became his employer’s point of contact for all matters relating to transporting hazardous materials, after obtaining his EU Transport of Hazardous Goods qualification through the Reserve.”

“The Reservist brings a number of advantages to the employer, including a broader set of skills and experiences, a natural inclination towards team working and many have an innate leadership ability.” Peter Flynn MVO, Director at PWC.

“Army Reserve employees use the skills they gain during their military training to enhance their outputs in their civilian roles. Amazon values individuals that like to learn and be curious; volunteering to serve your country whilst also being employed full-time certainly fulfils those criteria.” Amazon.

“By serving in the Army part-time alongside their day-to-day roles in the civilian sector, reservists help disperse Army know-how and best practices throughout the economy.”

Their experience is often drawn upon by industries such as cyber security, logistics, and the NHS.

The report refers to the 2020 Employer Attitude Monitor by IFF on behalf of Defence Relationship Management, citing that the survey indicated that three-quarters of companies that employ reservists consider that being a reservist is of significant benefit to the development of those employees, and 71% stated that employing reservists brings more advantages than disadvantages.

The report says this about the Army Cadet Force:

“The Ministry of Defence sponsors five Cadet Forces, including the community-based Army Cadet Force (ACF) and the Army section of the schools-based Combined Cadet Force (CCF). These are voluntary youth organisations which seek to provide young people (ages 12 and up) with interesting and challenging activities to help them develop valuable skills, gain vocational qualifications, and set them up for lifelong success. The programmes also show young people the opportunities presented by a career in the Army.

Research from the University of Northampton suggests that the cadet force helps underprivileged children to succeed: a sample taken at the Greater Manchester Army Cadet Force showed that involvement with the cadets reduced school absences from 19 days to 11 days a year,66 and rates of bad behaviour halved.

The ACF also included more than 9,100 Adult Volunteers in 2020, while CCF (Army) had a further 2,170 volunteers, all of whom instruct, coach, and mentor cadets in their weekly training sessions. These volunteers themselves receive skills and training through their involvement with the cadet forces, equipping them with skills and experience which can be transferred into their civilian lives.”