On Saturday 8th December, East Anglian Cadets and Cadet Force Adult Volunteers had the unique opportunity to listen to Ulysses Trust Ambassador, Tania Noakes; the first British woman to ski the length of Norway by completing the famous Norge På Langs route.  A former Army Officer, Tania now works as an international mountain guide in France and is an experienced adventurer and explorer.

Hosted by Brentwood School, Tania recounted the 2,533km journey from the southern (Lindesnes) to the most northern tip of Norway (Nordkapp).  A journey like no other, she completed the Norge På Langs route on cross-country skis, travelling solo unsupported and in the middle of winter.  In choosing to complete a challenge such as this, in her own words, “I am first and foremost an adventurer, with a love of language and of story-telling, who is forever being drawn deeper into life through curiosity. So taking on the Arctic Circle matched this perfectly!”

The audience was fascinated to learn more about her motivation to undertake such a trip, the detailed planning she had to put in place, the numerous challenges and amazing encounters she had en route.  Not only was the achievement a physical triumph, it was a mental one too.  Skiing in temperatures of -40 degrees, crossing dozens of frozen lakes across remote landscapes, sleeping in wooden huts and the occasional snow hole, Tania had to pre-position food and key items at nine locations along the way.  Tales of adversity, in particular broken ski boots, which could have led to life threatening frostbite, captivated the cadets. Tania shared some valuable life skills whilst also reminding them that adventure often only begins where planning ends.

She completed the challenge in 82 days, of which 72 days (566 hours) was skiing, and in the process raised over £8,000 for the Ulysses Trust.  Her trip had many memorable moments, from meeting herds of reindeer, to being accompanied for 190km of her route by a Greenland Husky called Joker, to seeing first-hand the incredible Northern Lights.

Listening to her, the audience was gripped and found her tale to be truly inspiring.  The event organiser, East Anglia RFCA Deputy Chief Executive, Maj (Retd) Jane Wilkes said, “Tania is an old friend, and I was delighted she agreed to speak to our Cadets about her extraordinary adventure.  I hoped that through listening to her, our youngsters would have their imaginations fired and speaking to some of the Cadets afterwards they are inspired to learn to ski and look to get involved with adventure training opportunities in the future.” 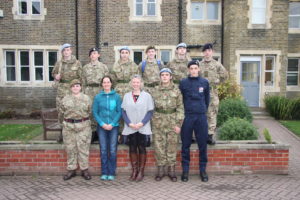