The cadets, aged 13-17 years came out in record numbers. The camp is the highlight of the cadet year with a challenging and interesting training package. The activities they tried included: 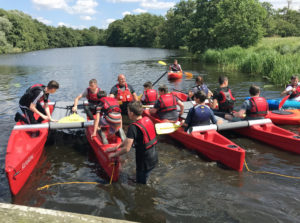 The cadets for most of the time lived at West Tofts Camp in barrack blocks with food provided by army contracted catering staff. 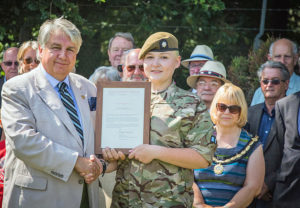 Richard Barnwell DL presented Sgt Keira-Narice Liddington, from Chatteris Detachment with a Letter of Commendation from the Society for the Protection of Life from Fire for her actions is assisting casualties at scene of a road traffic accident near March where both cars caught fire.

A welfare team under Senior Padre Ryk Parkinson (Priest in charge of Wisbech St Mary Parish) provided welfare support to the cadets. On a sad note this is Ryk’s last annual camp before retiring in early 2020 after 12 years service.

Col Mark Knight MBE DL, Commandant said: “ It was cracking 8 days for the cadets, they worked hard, played hard and I am sure enjoying a rest once back home. Being away from home without the access to playstations and phones and undertaking our training builds confidence and making new friends”