At a workshop filled with adult volunteers from Norfolk Army Cadet Force, a show of hands from the people in the room revealed that 45% of them had been cadets in their youth. 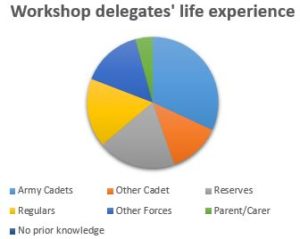 The workshop, run by Chris Braithwaite from the YES agency, got people thinking about who joins the Army Cadet Force as a volunteer, versus who gets asked to join.

Traditional methods involve asking the general public to join, at village fetes or county shows perhaps. But in this workshop, the delegates explored the distinction between community engagement and recruiting activity at detachment level.

The team at YES agency have been working with the Army Cadet Force (ACF) since 2016 to help their volunteers do just that. They developed the Grassroots methodology, so ACF counties can come up with adult recruiting strategies that focus the energy on activities that really work. Then the team at YES developed a residential weekend course with the ACF PR Training team, which proved so successful it was adapted to be run for local teams in a compressed format.

Chris has run 18 of these workshops, from Scotland to Cornwall, this year. He was invited to run this workshop during the Norfolk ACF staff training weekend to help boost people’s confidence and understanding of adult recruiting. Recruiting adult volunteers into the Army Cadet Force is the responsibility of all existing volunteers, because without a steady stream of new people to replace those who leave, the ‘Cadet Experience’ could not be maintained. 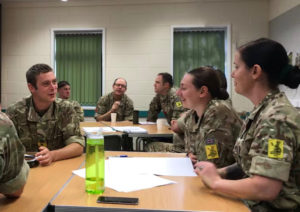 So Chris’ workshop encouraged people in the room to explore their own life experience, their own motivations for joining the Army Cadets as an adult volunteer, and how they have been able to change the lives of young people for the better thanks to their role.

“People like you, do this” he said to the group of 20 volunteers, whose experience ranged from new starter to seasoned detachment commander. During the day, they are electrical engineers, directors, van drivers, etc… Everyone had personal experience in the Cadet Forces or the Armed Forces. Nobody in the room was a member of the general public that recruiting activities often focus on.

“We won’t come up with an idea here today that will solve all our problems,” Chris reassured everyone. “Be persistent, do the same things over and over again, do the things that work where you are,” he said as the delegates shared which activities had been most successful for them and took note of which activities they intended to do again soon.

The most popular activities that Norfolk ACF are re-energised to carry out are:

If you would like to invite Chris to run one of his workshops for you and your team,  you can reach him at chris.braithwaite@yesagency.co.uk or ring his office on 01889 564 931.