The MoD Armed Forces Covenant Annual Report 2015 has been presented to Parliament, detailing the progress and successes of the past year.

This is the fourth annual Covenant report and the programme of work to deliver the Covenant continues at pace. The volume of activity that surrounds the Covenant is testimony to the commitment, right across society, to support the Armed Forces community.

The government is committed to ensuring that serving and former members of the armed forces, and their families, are not disadvantaged by their service and that they are given special consideration in some cases. The Covenant was enshrined in law in 2011.

More than 750 organisations have signed a Corporate Covenant, pledging specific support for the Armed Forces Community such as help with transition from Service to civilian life through work placement opportunities, and training courses. 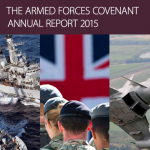 The Rt Hon Michael Fallon MP, Secretary of State for Defence said: “In my second annual report since becoming Defence Secretary, I am pleased to look back at the significant progress that the Covenant has made. While we have collectively achieved a great deal, I know there remains much to do to ensure the Covenant fulfills the nation’s promise to support the brave men and women who serve our country, with honour and distinction. It is a long term aim, and this Government is committed to its long term delivery.

The full report can be seen here or for a summary of key facts download the following Key Facts Annual Report 2015.

The principles of the Covenant have delivered lasting change for the armed forces community.

Key successes of 2015 include:

To find out more about the Armed Forces Covenant and what it means to you visit: https://www.gov.uk/government/ policies/armed-forces-covenant