Mrs Spence, whose role is representative of the Crown in Cambridgeshire and was formerly the county’s Chief Constable, has now completed her first year as Lord-Lieutenant and admits that “common sense, good fortune and support from others” have greatly helped in these early stages. The Lord-Lieutenant can be followed on Twitter @Lord_Lt_Cambs and a new website for the Lieutenancy is due to be launched later this year.

The Lord-Lieutenant met with this year’s Lord-Lieutenant cadets, appointed for their outstanding performance and achievements in the Cadet Forces. She also presented Meritorious awards to adults who have given outstanding service to their Cadet or Reserve Forces Units, including Capt. Brendan Molloy, Sergeant Major Tony Prout and Staff Sergeant Sue Clifford from Cambridgeshire ACF.

The newly appointed Lord-Lieutenants’ Cadets will gain an exclusive insight into civic life as they accompany the Lord-Lieutenant to various events over the next twelve months.

Cadet Force Long-service awards were received by Lt Col Trevor Cox for 42 years of service, and to Capt. Tony Blake for 16 years, the latter receiving his Captaincy at the same time. 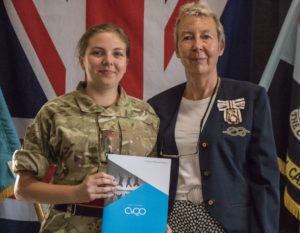 Five cadets were recognised for achieving their BTec Level 2 Diploma in Teamwork & Personal Development in the Community with CVQO:

CVQO Btec Level 2 registrations are now open for academic year 2018-19. Cadets aged 16-18 in England can enrol at no cost. To find out more, visit the CVQO website.