You are here: Home > News > Veterans

Working with local authorities to help deliver support to veterans

East Anglia RFCA, on behalf of the Ministry of Defence, helps local authorities reach & support veterans & their families if they have a need for public services related to health, education, housing, employment and community integration.

This is part of the RFCA’s wider remit of providing Community Engagement in support of the Reserve Forces and Cadets, under the Armed Forces Covenant. Our knowledge, experience and established network of contacts in the region helps us share and promulgate best practice in support of veterans’ well-being.

The Ministry of Defence and other organisations are working hard to retain a clear understanding of veterans needs in the UK, and define a clear plan of action to ensure those who have served and their families are not disadvantaged by their service.

The latest report exposes that 92% of UK adults think it is common or very common for former personnel to have a physical, emotional or mental health problem as a result of their time in the Forces. This figure is up 1% in 4 years, indicating this is relatively well-embedded public opinion.

Service leavers are generally aware of this public opinion and might feel this could impact on their employment prospects, or cause them to shy away from accessing support services. This is one of the challenges we’re helping local authorities to overcome. 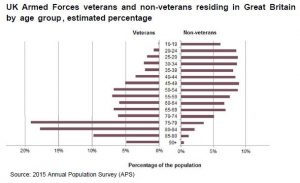 Published in October 2016, the Annual Population Survey: UK Armed Forces Veterans residing in Great Britain 2015 presents, for the first time, a breakdown of the number of veterans by county.

This report has been produced to gain a better understanding of veterans and provides evidence on the health, employment, education and housing status of the veteran population. It concludes, for example, that there are no notable differences in employment status of working age veterans when compared to non-veterans.

Anglia Ruskin University is conducting ongoing research at the Veterans and Families Institute, based in Chelmsford, Essex. Since 2014, they have been working to understand the needs of veterans and their families.

Council Covenant boards like Suffolk are keen to stay informed and share resources. For example, making available to everyone the November 2016 report on Veterans’ in employment that shows 71% of medium and large organisations say they would consider employing veterans, but only 39% would employ someone with no industry experience.

Promoting the Armed Forces Covenant to employers in the region

There are roughly 700,000 veterans currently in employment; over half are working in low-skilled or low-paid jobs, despite having developed many transferable skills in the Armed Forces that employers value highly.

We work alongside the national Armed Forces Covenant team, highlighting to local businesses the benefits of employing veterans, reservists, military spouses and cadet instructors. We do this by raising awareness of  the Armed Forces Covenant to employers on social media and at networking events, encouraging businesses and organisations to sign the pledge, and helping them define how they will deliver against that pledge. We also encourage local employers to achieve recognition & support from the Ministry of Defence by applying for Defence ERS awards.

Hundreds of companies operating in East Anglia show their support in different ways, based on what their business can support. There are many examples highlighting how far some employers can go to make a difference to the employment prospects of veterans. One such example is VETS East, a recruitment services provider and jobsearch platform for service leavers, veterans and employers in Norfolk, Suffolk and Essex.

The Career Transition Partnership (CTP) supports serving personnel leaving the Armed Forces for up to two years after discharge. We value the insights that the local CTP representatives share with us and local employers about how employers can benefit from free recruiting services from CTP, and reach individuals with the skills and qualities they’re looking for.

In November 2016, the Ministry of Defence announced that the RBL in partnership with other military charities were selected to deliver the Veterans’ Gateway project. This project, funded again by the LIBOR fines levied from banks and allocated to the Armed Forces Covenant grant scheme, was set up in response to growing concerns that there were inconsistencies in how easily veterans are able to access support & services because of variations in the delivery of those services in different parts of the country. The Veterans Gateway also aims to eliminate the number of veterans who ‘give up’ trying to access support & services because they feel like they are being ‘signposted’ from one organisation to the next during their time of need.

Building special adaptations to the homes of injured soldiers.

The Directorate of Infrastructure Army HQ provides funding to the RFCA for adaptations to living accommodation for injured service personnel. In 2015, we worked on nine projects, which included installing step-free access, a wet room conversion, kitchen installations with lower counters and much more.

The home adaptations we’re able to make for injured service personnel, on behalf of the Ministry of Defence, are carried out by our professional and experienced Estates team, who are responsible for the maintenance and management of the Reserve Forces & Cadets estate.

Many of our Association membership are veterans of the Reserve or Regular Forces. Our members are voluntary, and we are hugely grateful for their continued support to the Association. We all take great pride in how we’re able to support veterans in East Anglia.