You are here: Home > Public News > Suffolk Lieutenancy issues Certificates of Merit for outstanding contribution during lockdown
◄Back to News 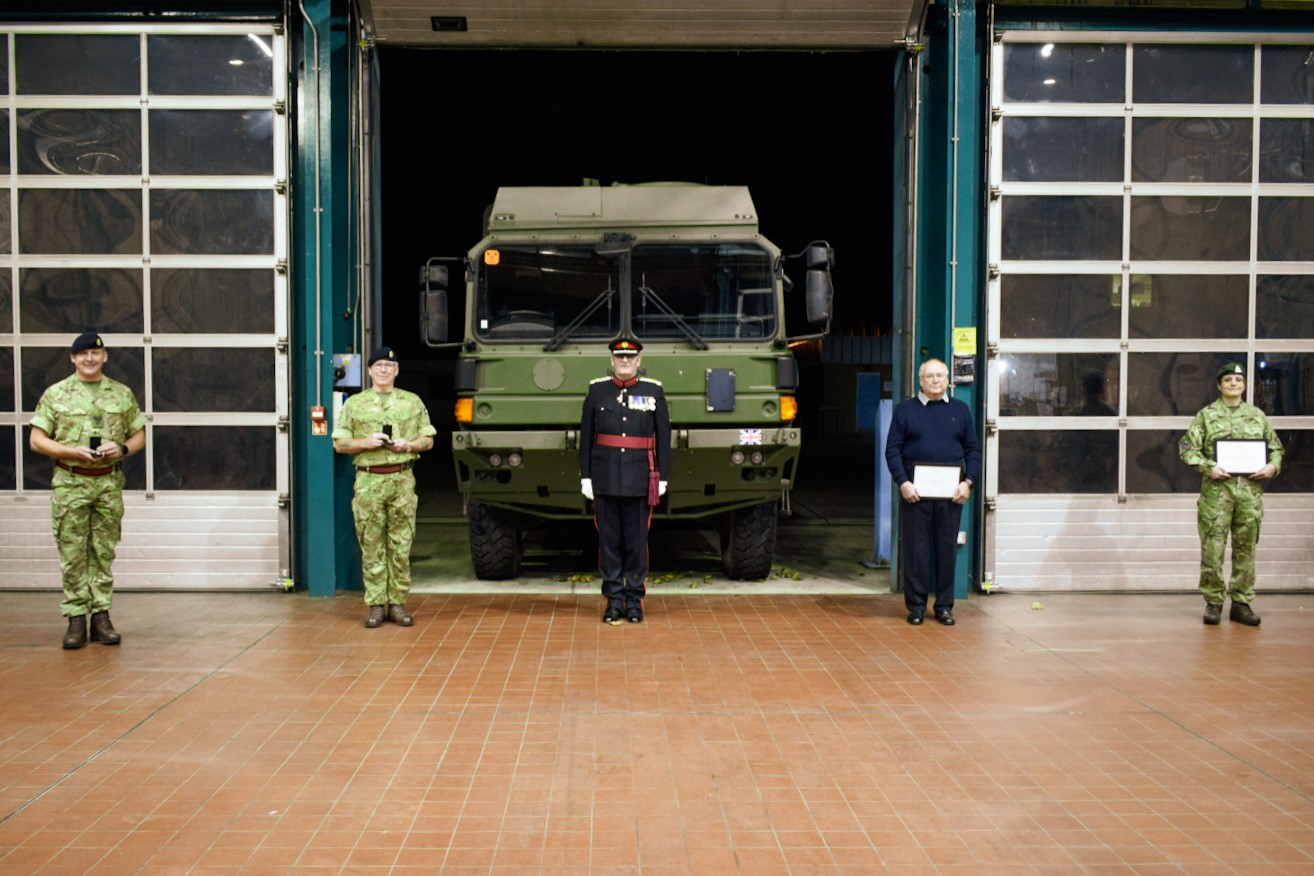 Deputy Lieutenant Anthony Fairbanks Weston presented a Certificate of Merit on behalf of the Lord Lieutenant for Suffolk, the Countess of Euston, to two individuals from 158 Regiment Royal Logistics Corps at a special ceremony in the Ipswich Army Reserve Centre on Tuesday 20th October 2020.

A socially distanced parade was held to enable the presentations of the awards and medals.

Both LCpl Kokonas and Mr. Thorrington made an outstanding contribution to the community in Suffolk during the Covid-19 pandemic.

LCpl A. Kokonas was an active member of the Blind Veterans UK Charity for several years but increased her involvement during lockdown.  Initially facilitating the installation of IT systems for the visually impaired at veterans’ homes, LCpl Kokonas helped initiate a new project with the charity by engaging with a former employer.  As the project manager, she persuaded ISG Ipswich to design a Virtual Reality platform free of charge to support the visually impaired. The project will improve the quality of life, particularly mental health, of blind veterans living in Suffolk when it is rolled out in early 2021. 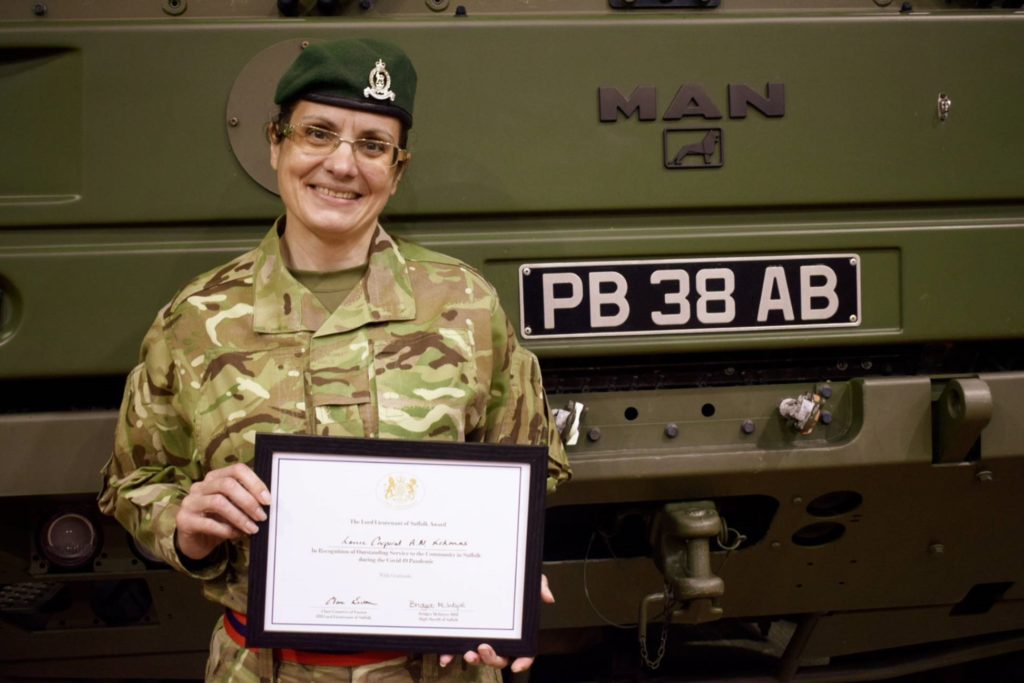 LCpl Kokonas said: “The Blind Veterans UK charity is a cause close to my heart, so it means a lot to receive this recognition from the Lord-Lieutenant and the High Sheriff.”

David Thorrington displayed tremendous initiative, courage and selflessness in his role as caretaker  with 202 (Ipswich) Sqn RLC at the Ipswich Army Reserve Centre. When lockdown came into effect,  the 3rd party cleaning contract was unexpectedly suspended. Of his own initiative, Mr Thorrington assessed the importance of hygiene in a COVID environment and took on all the daily sanitation duties, ensuring a level of cleanliness that has allowed the Permanent Staff to continue to engage in Op RESCRIPT activity in a COVID safe environment. 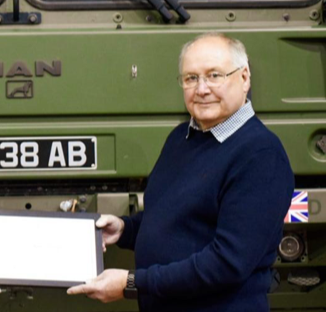 David said:“I saw an opportunity to help and so I helped; I didn’t expect anything for it but I must admit, I feel deeply honoured by the Lord-Lieutenant’s gesture.”

Volunteer Reserve Service Medals (VRSM) were presented to Sgt Bickers & SSgt Davis, both for 10 years’ service with the Army Reserve.

Sgt Bickers said: ‘I am proud to have to served with 202 Squadron and to have achieved all I have in the last 10 years culminating in the presentation of the VRSM for my recognised service’ 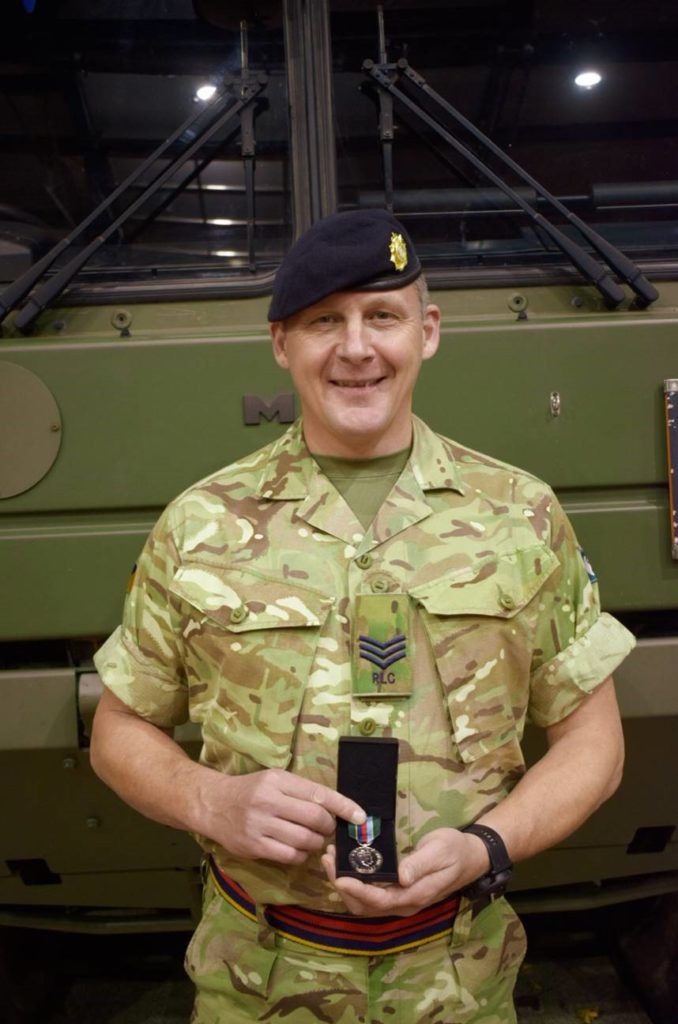 SSgt Davis said: ‘I  feel honoured to have received the VRSM in recognition of my service as the Permanent Staff SQMS’ 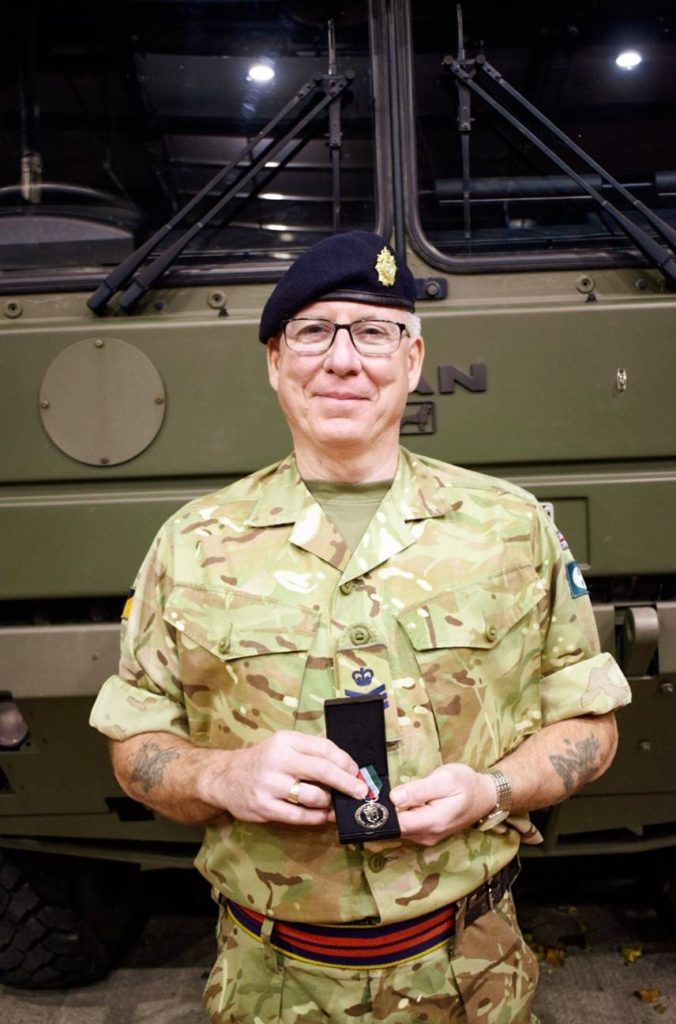 Anthony is also Honorary Colonel for the Suffolk Army Cadet Force and Chairs the Suffolk Reserve Forces and Cadets Association. He has received many nominations of contributions made by cadets, cadet instructors and reservists. 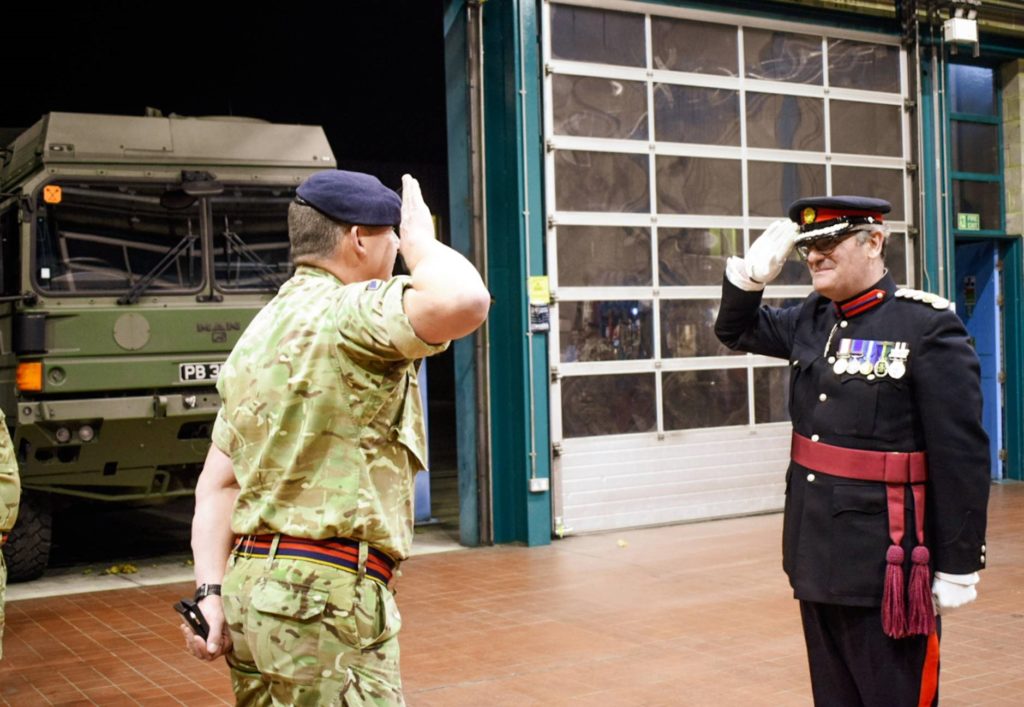 Anthony said: “‘It was a pleasure and an honour to deliver the VRSM medals on behalf of H.M. Lord Lieutenant of Suffolk.” He remarked how hard it is to achieve and thanked both soldiers for their dedication to reserve service. In relation to the Certificate of Merit, he said what “outstanding contribution” the achievers had made during COVID crisis and praised them on their achievement, which they should be extremely proud of. He finished with a congratulations to them all and said what a shining example they are to the rest of the squadron and the Reserve Forces.

Lt Col Rob Futter, Commanding Officer 158 Regiment RLC added how proud he was of the awards to reservists and civilian personnel working on behalf of his Regt, especially in relation to contributions during the last 6 months. He remarked on how much commitment it takes to achieve the VRSM. He finished by thanking them and their families for their support.

Over 50 reservists from within 158 Regiment RLC were deployed to assist in one way or another with covid-related activities over the last 6 months.

202 (Ipswich) Squadron is a Royal Logistic Corps Transport Squadron and is part of 158 Regiment.  The Squadron meets on Yarmouth Road in Ipswich and is currently recruiting for Army reservists.  To find out more information about joining the Squadron, please call 01473 258477.