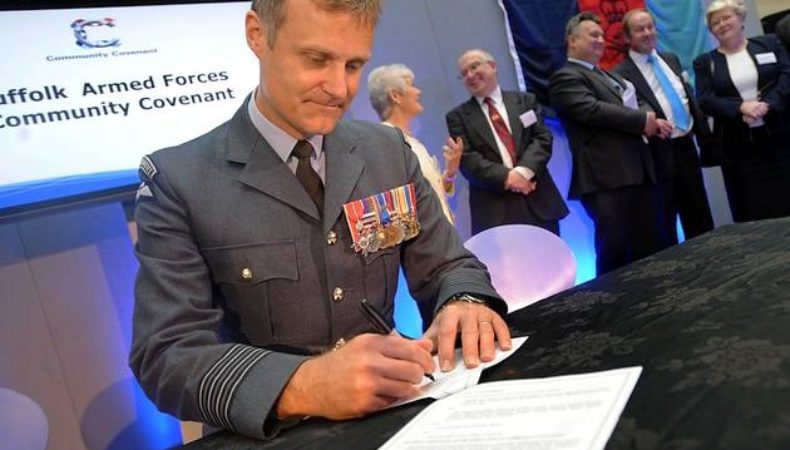 Local authorities in East Anglia have pledged to ensure that those who serve or have served in the Armed Forces and their families are not disadvantaged because of their service.

East Anglia RFCA works with the Reserve Forces Community Engagement Officers and local authorities together, to help deliver the Armed Forces Covenant in communities across the region.

All County Councils and unitary authorities in East Anglia have signed the Covenant.

Local authorities implement their Armed Forces Covenant in a way that fits with the values and ethos of their county. This results in inconsistencies in the delivery of support and services, as was outlined in the Forces in Mind Trust Report Our Community – Our Covenant in 2016.

Equally, local authorities and statutory service providers must themselves understand not only the issues affecting the armed forces community, but also stay abreast of who in their area identifies as part of the armed forces community. Some lead their own research into the latter, like the UK Armed Forces and Veterans Profile for Suffolk 2016, while data and insight provided by the Ministry of Defence supplements local knowledge. Some of these resources are available to download from our site, such as the report entitled Location of Armed Forces Pension and Compensation Recipients, October 2016. 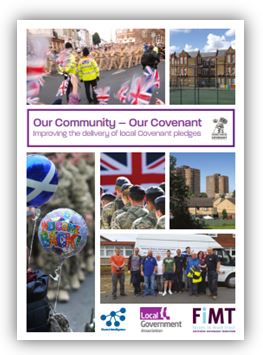 A new report for councils has been published on the Armed Forces Covenant by Forces in Mind Trust. Our Community – Our Covenant

This report offers new insight for councils to help with the delivery of the Armed Forces Covenant; in housing, education, liaison, and all other Community aspects of the Covenant.

It contains examples of good practice, and ideas for improving the local delivery of the Armed Forces Covenant.

The research behind the report was supported by the Ministry of Defence, and commissioned in response to national concerns that local implementation of the Covenant is inconsistent.

Insights in the report include statistics on how many councils with responsibility for housing report that they have reflected the Covenant in their policies (90%) and how many councils report that they offer targeted support and special entitlements (70%). Adult social care has emerged as the area in which the Covenant is least likely to be reflected in policies and strategies.

The report outlines a typology, reflecting the extent and type of the presence of the Armed Forces Community in a county.

The report also describes a core infrastructure, reflecting the actions taken by councils that have successfully implemented the Covenant.

Councils that have successfully implemented the Covenant have a core infrastructure in place.

Councils with no significant Armed Forces presence in their area are less likely to have the core infrastructure in place.

For those who can still improve how they deliver the covenant in their area, they might be intersted to know what Council Chief Executives said, when asked what steps could be taken at a national level to improve the delivery of the Covenant.

The most popular steps were: the publication of a checklist of issues to be addressed (69%); a clearer statement of the expectations associated with the Covenant (67%) and advice on how to meet those expectations (67%).

Councils that have successfully implemented the Covenant have acted in proportion to the size and type of their Armed Forces community.

Bradford has a significant and known presence of veterans. It’s an area, similar to Wigan and Glasgow, from which members of the Armed Forces are recruited and to which many resettle. There is also little if any serving presence. Bradford successfully addressed the proportionality issue within its diverse locality. Bradford identified the importance of keeping the different communities in balance by implementing the Covenant carefully.

The council engages people from different communities by identifying similarities rather than differences. It uses Armed Forces events as a chance to celebrate every community and their impact on the Armed Forces, and vice versa. This has led to Bradford being able to reach out to the harder to reach groups in the community.

The needs of older Veterans are in most cases consistent with those of the general population. Veterans have the added advantage of being able to access to support from military charities, and many councils have arrangements in place to ensure that those who qualify are referred. This benefits not only the people accessing services, but also councils through relieving the financial pressure on councils and limited adult social care budgets.

Councils that have successfully implemented the Covenant have a dedicated area on their website.

According to the recent survey, 60% of Armed Forces community respondents identified the need for a web page with relevant links run by the council. But, 30% of councils don’t yet have a specific web page dedicated to providing information to the armed forces community. This figure rises to 40% among district councils. Finally, only a quarter of councils report having a web page that is very active.

Bedford Borough Council contains useful contact information for service charities and services available to everyone in the community, and a copy of a special booklet they produced for veterans. The Central Bedfordshire Council Armed Forces pages go a step further and includes a copy of the Community Covenant pledge they signed. Luton Unitary Authority has included an appeal to people who might be looking for funding from the Armed Forces Covenant fund, and the contact details of their Armed Forces Champions.

Peterborough Unitary Authority makes it easy to find the Armed Forces Champion, with a page dedicated to the individual and his work. Thurrock Unitary Authority have published details of their Veterans Charter and details about their supportive housing policies.

Norfolk County Council  adds information about their Board, their action plan, the key locations with serving personnel and their families in their county and records of achievements in support of the armed forces community from 2015.

Suffolk County Council maintain an external site through their Covenant Board and Task Force whic laso includes comprehensive information about how the Council support the armed forces community, including holding a conference for key stakeholders and commissioning research into how many veterans are living in the county, where they are and what their needs are.

Similarly, Hertfordshire County Council maintains a dedicated microsite. They’ve included a list of companies based in their county that have pledged to support their employees and potential employees under the Armed Forces Covenant, and list businesses that are offering discounts on products and services to the armed forces community.

Councils that have successfully implemented the covenant have clearly communicated the role of councils in relation to the community covenant.

Expectations flowing from the Covenant can vary significantly, with some members of the Armed Forces community thinking that the Covenant gives them the right to a service, as opposed to not being disadvantaged compared with others in the delivery of that service.

Conversely, there is a significant minority of ex-Service personnel with a set of problems related to health, housing or debt who are hard to engage. The difficulty councils face in reaching this group may partly be due to an unwillingness on the part of ex-Service personnel to identify as a Veteran. We often hear that Veterans were too proud, too afraid of being perceived as ‘damaged’, or too embarrassed to identify themselves as Veterans, especially when they were in a situation of need.

A lack of awareness of how statutory services operate, may also come into play. According to the research, this is a particular difficulty for Veterans who entered the military at a young age and left following a few years of service.

Some councils have recognised this situation and have designed innovative programmes to engage Veterans with complex issues which are in large part likely related to their service. They are confident that investing in support for Veterans can reduce demand on public services in the longer term.

Making the Armed Forces Community more aware of what the Covenant is and how it can be used will encourage them to self-identify as a Veteran if they need help with addressing a problem. Councils can support this approach by embedding asking whether people have served in the Armed Forces in their relevant procedures. Using Veterans as case workers is considered a good way to get Veterans engaged with services.

Councils that have successfully implemented the covenant have partnered with others organisations to offer Employment support.

Plymouth holds an employment fair which is attended by businesses, charities, the council and other local organisations as well as members of the Armed Forces Community. This enables those members of the Armed Forces Community who are looking for employment, including those facing employment difficulties to get a job by talking to employers looking to recruit. Alternatively, it is a chance to boost awareness on how to get a job, and offers opportunities such as job shadowing, CV writing, and mock interviews. Charities such as the Royal British Legion and Combat Stress attend to offer further support to those who might need help in other areas. Plymouth also has a Corporate Covenant Group which is fed into the Community Covenant Group. This is a chance to get local businesses together to talk about the disadvantages that members of the Armed Forces Community, including Veterans are facing in their area and work towards addressing those disadvantages identified.

Wiltshire Council and Swindon Borough Council jointly manage an initiative called Higher Futures, which was developed by the Swindon and Wiltshire Local Enterprise Partnership (SWLEP) with involvement of the military. This seeks to equip Veterans and Reservists with the necessary higher level skills (NVQ Level 4, HND/Degree and above) in business sectors which currently experience shortages in qualified employees.

A toolkit to help councils to implement the Covenant.

The Forces In Mind Trust report Our Community – Our Covenant includes:

Do reach out to us on ea-info@rfca.co.uk if we may be able to assist further.