Cadets from 2484 Bassingbourn Sqn, 2484 Cambourne DF, 2482 Henlow Sqn and 2500 St Neots Sqn recently gathered for an exciting visit to Former RAF Finningly to have a tour of the Avro Vulcan XH558 during winter service.

Avro’s Chief Designer Roy Chadwick first sketched out the innovative delta-winged configuration of the Vulcan over 60 years ago in 1946, just five years after the first flight of his other famous creation, the Avro Lancaster. Sadly he died in a plane crash the following year and never saw his second masterpiece fly. The prototype full-scale Avro Vulcan VX770 first flew on the 30th August 1952, and spectacularly appeared in public at the Farnborough Airshow just a few days later.

Cadet Matthew Carr from 2484 Cambourne DF said: “There was much to discover about the Vulcan, I was surprised by the size of the aircraft, especially with a view from the top.

Seeing the Vulcan up close has increased my passion for aviation, also being able to share the experience with my fellow cadets and cadets from other Squadrons was most enjoyable.”

From 1957 to 1969, during the dark days of the Cold War, the Avro Vulcan was the main British contribution to the NATO strategic nuclear deterrent. No British bomber ever flew with a live nuclear weapon; the deterrent strategy was a success. 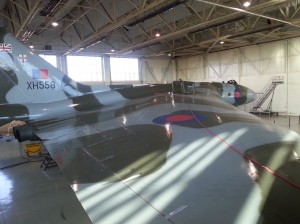 In all, Avro supplied 134 Vulcans to the Royal Air Force. The final version of the Vulcan, the B.Mk2, had gracefully-curved leading edges added to its 34metre delta wingspan, making a beautiful, instantly recognisable design.

The story of the Avro Vulcan XH558 began on 1st July 1960, painted originally in “anti-flash” white, she made her delivery flight from the factory at Woodford, near Manchester, to RAF Waddington near Lincoln. XH558 was the first Vulcan B.Mk2 to be delivered to the RAF, and is now the oldest complete Vulcan in the world.

XH558 was also the last Vulcan to leave RAF service, a career of 33 years. Her final flight was on 23rd March 1993 to Bruntingthorpe Aerodrome in Leicestershire, having been sold off by the Ministry of Defence to C Walton Ltd, a family firm who purchased and maintained her, with the thought that one day, she might be returned to fight. 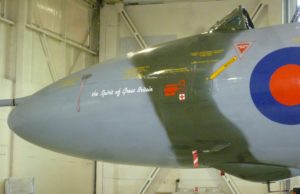 On 31st August 2006, XH558 rolled out of the hangar for the first time in 7 years. XH558’s supporters in the Vulcan to the Sky Club, managed to raise over £1.3million to save the project and finally, 14 years after its last flight and with over £7 million spent, Vulcan XH558 roared into the air again on Thursday 18th October 2007, a perfect day for flying.

XH558 was finally granted her Permit to fly on 3rd July 2008, and returned to air displays two days later at RAF Waddington Airshow, her former home. She flew in formation with Roy Chadwick’s other famous creation, the Avro Lancaster.

It is with great thanks to the people of Great Britain that the XH558 is still able to fly and that the Trust has the support needed to be given the attention to fly until 2015.

The XH558 truly is “The Spirit of Great Britain”.

If you would like information on how to join the Air Cadets, become a member of staff or support the Flight by joining the Civilian Committee, please call to arrange a visit at Bassingbourn Barracks or at Cambourne Sports Pavilion, Monday and Wednesday evenings between 7pm and 9pm.