An Apache Attack Helicopter flew into Bury St Edmunds on Saturday 8th February and some of the region’s Army Reserves showcased their job opportunities.

The helicopter was just one of a range of vehicles and equipment on display on Angel Hill. Other vehicles included a DROPS (Demountable Rack Offload and Pick Up System) and JCB fork lift truck. 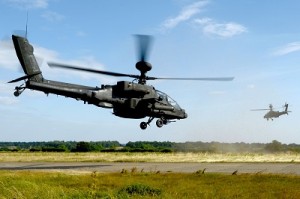 A range of stands including the latest weapons used by the Reserves were also on display as well as 6 Army Air Corps Part Task Trainer on display, used for training to simulate the upload and down load of the aircraft munitions including Rockets, chaf and flares.

6 Regiment Army Air Corps is an Army Reserve unit that provides essential ground crew soldiers to keep Apache helicopters operational irrespective of the conditions. The Regiment has a Squadron based in Bury St Edmunds with detachments in Norwich and Ipswich.  The unit has a constant stream of personnel supporting the Regular Army in the UK, Afghanistan and Kenya.

The Company is looking for individuals to train as Intelligence Analysts who are capable of collecting, processing and interpreting information. Intelligence Operators must be able to understand complex situations and then communicate their conclusions to decision makers in often high-pressure situations.

167 Catering Support Regiment RLC has its Headquarters and training facilities at Prince William of Gloucester Barracks, Grantham. As an Army Chef you will be trained to cater for small and large numbers of soldiers in a range of environments from a field kitchen in a forest to preparing a regimental dinner for 150 diners. You will have great opportunities to travel and support the Regular Army around the world.

Soldiers from all five units, some who have served in Afghanistan, were on hand to speak to members of the public to find out more about the role of the Army Reserve and the commitment required.

This event is part of a wider recruitment campaign which aims to encourage new recruits into both the Regular Army and the Army Reserve. Reservists typically train for one night per week and often at weekends and attend an annual two week training exercise.