124 Transport Squadron were awarded Freedom of Entry of the Brentwood Borough Council last year, giving the unit the right to march through the streets of the Borough on all ceremonial occasions with colours flying, drums beating and bayonets fixed.

Captain Paul Herlihy Officer Commanding 124 Transport Squadron said: “We feel extremely proud to be honoured in this way.  Many of our soldiers have deployed on operations over the last few years.  Occasions such as this give them encouragement that the community recognises and supports them.”

This October, they exercised their right to parade for the first time. The march started at 2pm, sadly exactly at the same time as the rain, which suddenly came lashing down during what had been, and soon thereafter returned to being, a bright clear day. The Freedom Parade was led by the Band of the Irish Guards, and the local Army Cadet Force helped with parking and general event coordination.

At a reception in the Warley Army Reserve Centre, where the unit is based, The Mayor of Brentwood, Councillor Noelle Hones and Dennis Rensch DL congratulated two Reservists who were receiving awards that day. 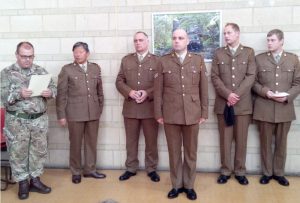 This is a great example of reservists being visible in the local community. Captain Nick Allston, the Permanent Staff Administration Officer (PSAO) said: “It’s so important to the squadron to be accepted in the community.”

The squadron is leading the Remembrance Day parade in Brentwood High Street on Sunday 13th November; many other uniformed organisations including sea cadets, air cadets, army cadets, scouts and cubs will be joining in the parade to honour all who have suffered or died in war.