David Morgan, Director Commercial and Subcontract Management introduced Kristina Carrington from SaBRE who talked about the importance of business support for the Reserve Forces and how companies such as Raytheon can benefit from the many qualities and characteristics of existing and potential employees who are members of the Reserve Forces. 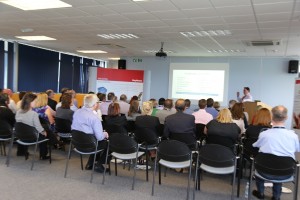 y, MBE, Head of Land Systems shared some anecdotes from his time in the Army and experience with the Reserves and Sam Osei-Agyemang gave an insight into life as a Reservist.
Squadron Leader Tim Crichton RAFVR(T) from the RAF Cadets ended the presentations with a talk on the Air Cadet Organisation and the training qualifications on offer to young people throughout the Cadet organisations.

After the formal presentations Raytheon employees took part in a number of fun activities designed to improve trust and communication.
Richard Daniel, Chief Executive, thanked all the presenters and confirmed our commitment and support for the Reserve Forces. He stressed the importance of raising awareness throughout the company and in particular with our new graduates, who join the company each year.

Various opportunities will be available throughout the year for employees to experience what life is like in the Armed Forces. Raytheon UK also plans to set up an Armed F 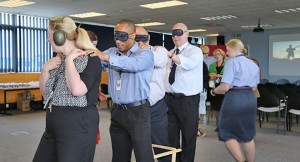 orces Employee Network that is aimed at supporting Veterans and Reservists. Next year’s Armed Forces Day Event will be more localised with activities planned in Harlow, Gloucester, Glenrothes and Waddington.
Background on SaBre

There are around 30,600 Volunteer Reservists in the UK. Coming from all backgrounds, regions and jobs, these are ordinary men and women who give up their time to train and serve alongside Regular Forces. For more information about SaBre, visit their website: http://www.sabre.mod.uk/Employers/What-are-Reservists.