On Thursday 19th February, nine key businesses based in Norfolk were rewarded with a Ministry of Defence Employer Recognition Scheme Silver Award for demonstrating their support to Reservist employees.

The awards were presented by Lord-Lieutenant for Norfolk Richard W Jewson ESQ JP at RAF Marham, Kings Lynn in Norfolk.

The nine companies from Norfolk who were awarded the ‘Silver Award’ all employ Reservists and have demonstrated their supported to Defence from training courses to mobilisation.

Kristina Carrington, Regional SaBRE (Supporting Britain’s Reservists and Employers) Campaign Director for East Anglia said: “The presentation event was a great success with many of those in attendance having the opportunity to speak to other Norfolk employers about their experiences of employing reservists. The MOD received over 500 nominations for Silver Awards across the UK and 105 have been awarded to employers based in East Anglia.”

Lord-Lieutenant for Norfolk Richard W Jewson ESQ JP said: “I congratulate the Silver Award winners for the part they play in supporting the Reserves.”

Councillor Robert Kybird, Chairman of Breckland Council said: “Breckland Council are both keen and proud to be able to support our armed forces and reserves. The Silver Awards serves to recognise and encourage others who may wish to serve their country.”

Jan McKirdy, Matron at James Paget University Hospitals NHS Foundation Trust said: “It is an enormous honour to have our organisations continued support for Reservists recognised. We also benefit from the skills gained by our reservists and committed to encourage more staff to get involved.”

Major Jenny Fraser, Reservist and Senior Sister at James Paget University Hospitals NHS Foundation Trust said: “It is a great honour to be recognised for the support our hospital trust gives to our reservist and also to all employers and reservists continued mutual support.”

Charlie Hall, Deputy Chief Constable at Norfolk Constabulary said: “The police service recognises the immense benefit to be had from drawing your workforce from local communities, and Norfolk constabulary is therefore pleased to support reservists and delighted with our Silver Award.”

David Pomfret, Principal at The College of West Anglia said: “The college is proud to support the Armed Services by supporting Reservists and training the future workforce and I am delighted to have been invited to collect the award.” 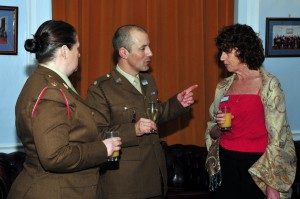 Stephen King, Partner of Mills-Reeve said: “If represents the extent to which the firm has acknowledged the support our reserve forces held to participate effectively in their endeavours.”

Reservists are men and women who give up their free time to train alongside our regular (full-time) military forces and may be called on to serve the country in times of need at home or abroad.