Everyone who has left the military since December 2018 will automatically be given a new Veteran ID card, which will help them access specialist support and services.

The cards allow veterans to easily verify their status to the NHS, their local authority, and charities, helping them to access support and services where needed.

Anyone who left the Armed Forces before December 2018 will be able to apply for a new Veteran ID card by the end of this year.

Minister for Defence People and Veterans Tobias Ellwood said: “We owe a huge debt of gratitude to the ex-forces community, and we are working hard to ensure they receive the support they deserve. These new cards celebrate the great commitment and dedication of those who have served this country, and I hope they can provide a further link to ex-personnel and the incredible community around them.” 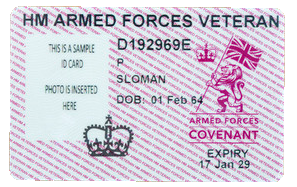 Veterans UK – which manages pensions and compensation payments for the armed forces – local authorities, service charities, NHS and GPs will also benefit from the change, as they will not have to conduct time-consuming checks to identify individual veterans.

The new Veteran ID card is one of three that are available to service leavers. Personnel leaving the Armed Forces can keep their military IDs, known as the MOD Form 90, and they can sign up for the Defence Discount Service.

Access to support and services is rapidly improving for veterans and their families, with the Strategy for our Veterans published last year, and the Veterans’ Gateway launched in 2017 which has received over 20,000 enquiries.

Many of the RFCA staff and members have served in the Armed Forces, and will be eligible for a Veteran ID card. In 2017, there were an estimated 245,000 veterans in East Anglia, out of 2.4 million UK Armed Forces Veterans in Great Britain.