Cambridge Army Reserve Centre have now installed brand new signs to coincide with the change of name and rebranding for The Territorial Army (TA).

With two Army Reserve Centres in Cambridge, both now have the new, eye-catching signage on display. The first is located at Coldhams Lane and is the base for 3 Military Intelligence Battalion and Cambridge University Officers Training Corps. The second Army Reserve Centre on Cherry Hinton Road is home to 254 Medical Regiment and a Royal Marine Reserve Unit. This rebranding is a new era for the unit and one of the most significant changes in the 100 year history of the formerly known Territorial Army.

Installed on Friday 14 February 2014, the new Army Reserve Centres signs feature a brand new design and striking red colour. Cambridge Army Reserve Centres are two of the many centres in the East Anglian area involved in the name change, an exciting prospect which will better reflect the enhanced role of the Reserves and their full integration into the whole force. 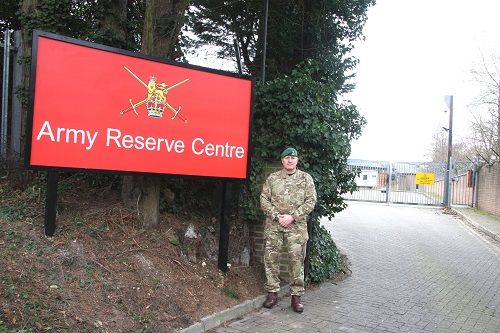 Nationwide, the Army Reserve makes up one quarter of the British Army and reservists routinely work side-by-side with their Regular counterparts. Over the past two decades Reservists have contributed to defensive, humanitarian and peacekeeping operations in Afghanistan, Bosnia, Kosovo, Sierra Leone and Iraq.

If you are interested in joining as a Reservist or for more information about the Army Reserve in Cambridge, contact either Captain Brad Reader of the Intelligence Corps on 01223 275784 or email 3MI-32-IOSS-PSAO@mod.uk or Warrant Officer Graham Smith at 254 Medical Regiment on 01223 275118 email 254med-recruiting@mod.uk

Get in touch…
Army Reserve Centre, Cherry Hinton Road is a base for the 254 Medical Regiment and Headquarters Squadron. For more information contact ROSO Graham Smith 254med-rhq-roso@mod.uk or call 01223 275118.

Take a look at the Downloads section for the Press Release for this news story along with images.