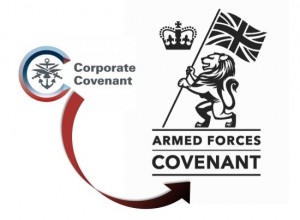 The new logo unites all the delivery partners in their common goal to achieve the best outcomes for the Armed Forces community.

The Covenant is a promise from the nation, ensuring that those who serve or who have served in the Armed Forces, and their families, are treated fairly.

Businesses and local authorities who wish to support the Armed Forces community can sign the Covenant, and publicly declare their commitments.

Existing Covenant Pledge certificates dated before January 2016 remain valid and do not need to be reprinted.

All certificates produced from January 2016 onwards will use the new brand identity.