On the evening of 23rd June 2015, 202 Transport Squadron part of 158 Regiment Royal Logistic Corp and 129 Field Company, part of 104 Battalion Royal Electrical and Mechanical Engineers had the honour of the presence of the Mayor of Ipswich, Councillor Glen Chisholm for the purpose of presenting medal’s to 4 current members of the Army Reserves and one former member.
At 8pm, with a cohort backdrop of present members of the Ipswich Army Reserve Centre, Councillor Chisholm presented the Clasp to Sgt Philip Davie’s Voluntary Reserve Service Medal (VRSM), for completing 15 years continuous and meritorious service to the Army Reserve. The Mayor then went on to present the Accumulated Campaign Service Medal to Lance Corporal Matthew Cockroft; this was for completing more than 36 months on Operations in support of the Army, seeing service in Northern Ireland and Afghanistan.

Former reserve, Sgt Daniel Coote received is VRSM for serving 10 years as a member of the Army Reserve, his citation also mentioned his outstanding performance whilst serving on a recent tour of Afghanistan where he received a Commander’s Commendation for his sterling efforts in support to his regular counterparts. Corporal Edward Hele received his VRSM, for serving 10 years with the Army Reserves, and finally, Lance Corporal Zac Sutton also received his VRSM from the Mayor. One more surprise however lay in store for LCpl Sutton, the Officer Commanding 202 Transport Squadron, Major Cathy Bradshaw asked Councillor Chilsholm if he would do the honour of also presenting a promotion in rank to the now, Corporal Sutton; this was a total surprise to him and also meant, in line with tradition, he would have to ‘ring the bell’ in the Reserve Centre Bar. 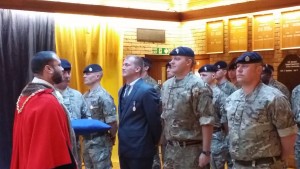 Directly after the presentation the Major was given the opportunity to speak to those attending, he praised the medal recipients and commended the outstanding work and dedication the Army Reserves played within the Army and in particular how proud the Ipswich community were in the links it has with the Armed Forces within the local area. 158 Regiment RLC have the honour of being present members of the Freedom of the Town of Ipswich.

All those attending the evening, which included family and friends of reservists, were then invited to a curry buffet and drinks in the Reserve Centre Bar. This gave the medal recipients the opportunity to ‘show off’ their newly bestowed awards and the Reserve chefs there culinary skills in providing food for over 80 people; a task they carried out superbly. It also gave Corporal Sutton the chance to ‘ring the bell’ and buy a round of drinks for everyone attending in celebration for his promotion.

Whilst food was being laid out and all those attending where making their way to the bar, Councillor Chisholm was given a guided tour of the Reserve Centre, he was informed what role 202 Transport Squadron and 129 Field Company played within the Army Reserve and the opportunity to get inside one of the MAN SV; the current preferred logistic vehicle of the Armed Forces.
The evening was a resounding success. It gave the medal recipients the opportunity to receive recognition for their dedication and hard work from the Mayor, the more junior members of the Army Reserve the aspiration to achieve equally, or greater, accolade and the knowledge that they are supported by the general community within the Suffolk area.