Like many schoolboys who join the Air Cadets, Chris Ward dreamed of being a pilot. But when he grew up he went on to be something quite different – an actuary, working as an investment consultant for pension schemes.

However, Chris, 32, never forgot his ambition to join the RAF, so in 2005 he joined the Reserves and went into the RAF Police.

Since then he has had as much adventure and travel as he could wish for, not to mention invaluable training.

“The RAF is fantastic and a complete contrast to my everyday life and the bonus is many of the skills transfer over, particularly in organisation and communication. I have gained massively in confidence in dealing with senior colleagues and difficult situations. My bosses recognise how effective the RAF training has been.” 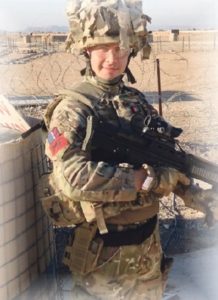 Chris has been mobilised twice – once to Iraq and once to Afghanistan. He has also gone on two-week RAF camps abroad to Cyprus, Oman, America and Gibraltar. Chris counts his four months in Iraq as a high spot – despite the fact the camp was being bombed daily.

He said: “At the base in Basra there were between ten and 20 rocket attacks every day. The siren would go off and we’d throw ourselves on the ground until the all-clear. It was tough, but we got used to living like that and I really enjoyed the work. I was on air transport security for military flights from the UK and was also flying to Kuwait and all around Iraq.

“I got a medal for that tour. Before, I was indifferent to medals but after Iraq I felt I really deserved it. I got another for the six months I spent in Afghanistan, dealing with suspected terrorists and improvised explosive devices, and another for my work at the Queen’s Jubilee last year. I’m proud of them, they are an important recognition of my work. “I enjoy my day job, but I love having my RAF training weekends and my other life to look forward to as well.”

Reservists work alongside regular RAF personnel in the UK and on overseas operations in a huge variety of roles from Paramedic to Photographer, Radiographer to Intelligence or Logistics Officer. All Reservists could be deployed at least once during their term of service. Visit www.thesun.co.uk/rafreserves to watch more Reserves talk about their experiences.

To join, you must be aged between 18 and 50 (or up to 56 if you have previous military experience). Your contract will be for five years and you must be able to commit to at least 27 days per year. Pay is determined by rank, role and level of experience. Comprehensive employer support is available.