Sue Chittock spends her day to day life working as a Senior Underwriter at Aviva, UK Insurance Company, but has recently returned from a one-year tour overseas. She shares her experience as a Troop Commander.

“Twenty four years in the Army Reserves, a tour of Afghanistan behind me and still I felt I had more to give! So, on Monday 13th May 2013 I started a twelve month period which would see me spending three and a half months in Germany and six months in Afghanistan.

Sue went on to talk about what life was like on tour. “I arrived in Afghanistan, Camp Bastion, in September where temperatures were still getting up to 40 Centigrade during the day. However, these soon dropped and over Christmas we were operating in four inches of snow. Accommodation was in “pods” (tents) that held up to eight people.

Living only 10 minutes from where you work was definitely an improvement on my usual two hour commute into London. Three cooked meals were also a luxury that I’ve been missing since my return. Entertainment was limited, most preferring to watch DVD’s in their own space – I can honestly say I have watched more films during those six months than I have in the last six years.

As part of my role as Troop Commander, I had 23 guys and a girl to manage. This included facilitating training programs as well as providing command leadership. The patrols I was working with were also focused on bringing out equipment from the remaining bases and preparing them for their handover later in the year to the Afghan National Security Forces. 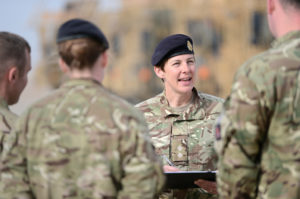 I’m now back from my year out of the Aviva office and have had the chance to reflect on the whole experience. Am I glad I did it? You bet! Do I want to be in the army full-time? No thank you. The officer training I’ve completed and my wider Army skills have definitely helped me progress up the career ladder fairly quickly. Decision making is the biggest skill I have gained along with my robust communication, decisiveness and organisational skills.

More information for Reservists…
Aviva want to understand more about you and your career aspirations, so they can highlight opportunities that might interest you. Take a look at their objectives and mid-year review process.

Visit the Employers Page of our website to find out about SaBRE and what East Anglia RFCA Employer Engagement can do to help employers of Reservists.