The new Cadets had to have completed their training in military knowledge (badges of rank, history of the ACF etc), basic navigation, the Country Code, introduction to fieldcraft, basic foot drill and weapons safety. Completing the ACF Basic Training can take up to three months of parading at their own Detachments, as well as attending a Company Training weekend to complete their final tests.

Emma Speller, mother of Maisie Speller (13), of Dunmow Detachment (pictured), said: “Since my daughter has started Army Cadets, I have noticed a change in her maturity and she looks forward to learning new life skills, especially First Aid.” 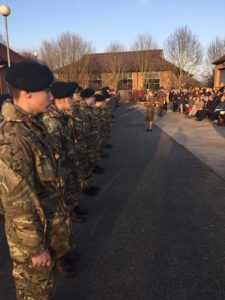 Organised by Maj Sean Edwards, B Company Commander, the Basic Cadet Cadre Passing Out Parade is a celebration marking the completion of the first stage of training for Army Cadets.

Sean said: “Although the event is a celebration, I feel that it is less about celebrating an achievement and more about each cadet making their Cadet Promise, as part of the Enrolment Ceremony, in front of their peers, their Cadet Directing Staff, their Cadet Force Adult Volunteers and their families.”

He added: “This will be the first formal parade they and many of their family members would have seen on such a scale and, by making the occasion as grand as possible, they and their families will always remember this occasion and be rightly proud of themselves and drive them forward to make even more achievements during their time in the ACF and life in general.”

The ceremony is also very rewarding the Adult Volunteers to see the sense of achievement and pride on the faces of their cadets and family members, because this would not be possible without them and it serves as a great reminder of why they are so committed to what they do, in the planning, preparation and execution of the cadets’ training.

Sergeant Instructor Rich Essl, of Epping Detachment, said “The team are so proud to see the cadets receive their Basic Star badges after an intense number of weeks training at Detachment and culminating in the Testing Weekend and Enrolment Ceremony.”

Sergeant Major Instructor Shelley Chalmers, of Dunmow Detachment, who had 15 recruits on the parade, said “I feel proud of them all for having the courage to try something new.”

The ACF follows the Army Proficiency Certificate, which is a progressive training syllabus from Basic, through One, Two, Three and Four Star to the ultimate level of Master Cadet.

By passing their Basic, the cadets will be able to increase their knowledge on ten different subjects, including drill, weapons training, shooting, first aid, navigation, expedition training and fieldcraft.

Passing their Basic also allows the new cadets to attend the annual camp, a ten-day residential trip, which is the highlight of the training year in the ACF. 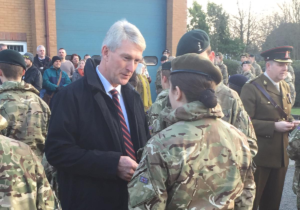 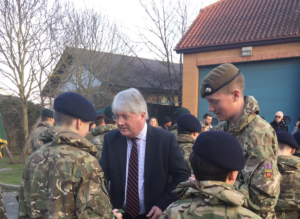 Both Deputy Lieutenants were impressed by the enthusiasm and commitment of the cadets receiving the badges and the cadets and Cadet Force Adult Volunteers who had supported them throughout their training, both throughout the weekend as well as at the eight Detachments they have been parading, over the last few months.

Essex ACF are fortunate that the Essex lieutenancy has assigned twelve “Support Deputy Lieutenants, 3 per Coy, to support on events such as this one.

Feature Photo: Two of the Directing Staff cadets – Cadet Company Sergeant Major Lucy Phillips (16) of Waltham Abbey Detachment and Cadet Sergeant Michael Woodward (17) of Dunmow Detachment, prior to the cadets getting on parade.