Reservist Darren Baldwin (A.K.A Balders) decided to take part in Reserves Day 2015 to raise awareness of what the Reserve Forces do to the wider Hertfordshire Constabulary as well as the general public.

In his civilian role, Darren is a Civilian Crime Officer with Hertfordshire Constabulary who joined the Reserve Forces just under a year ago on the 26th June 2014 after he had been inspired to learn more after working alongside a Royal Air Force Police Sergeantas as an Ascension Island Police Officer. 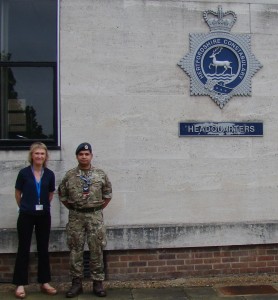 Highlights of Darren’s Reserves career include successfully completing Phase 2 training and passing out as a Royal Air Force Policeman, being presented with a RAFP warrant card, armband, military police patch and police whistle alongside 7 colleagues.

Darren believes that joining the Reserve Forces is for those who would like to be taken out of their comfort zone and challenged, he said “Not only is it an opportunity to serve your country, see more of the world and access first class training but it is a chance to take part in some incredible adventures that you wouldn’t necessarily experience in civilian life”

Darren’s next step is to complete a 5 day Aviation Transport Security Course which he is due to undertake in August of this year. After being in service for less than a year, Darren has achieved an incredible amount and developed skills in a variety of areas, all of have which benefitted him personally and in his civilian career.

If you would like to know how you can journey down the same path as Darren, take a look at our RAF Reserves page and find out if you have got what it takes to be a Reservist.