The Light Dragoons have been based at Robertson Barracks, Swanton Morley, for the past 15 years. More than 4,000 people, including school children, lined the streets to say farewell to the reconnaissance unit.

The regiment are packing up and moving some 200 miles to their new home in Catterick, North Yorkshire. Their commanding officer said it would be ‘a strain to leave’ after putting down ‘deep roots’ in Norfolk.

Thousands of people, including hundreds of school children, lined the streets of Norfolk today to wave farewell to the Light Dragoons. 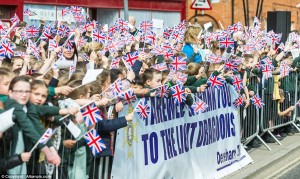 Around 250 men and women from the reconnaissance unit, which has most recently served in Iraq and Afghanistan, marched through the town of Dereham for the final time. They were supported by more than 4,000 well-wishers, many waving flags, who lined the streets to mark the conclusion of the regiments 15 year tenure in the county.

They are set to leave Robertson Barracks in Swanton Morley this summer and move some 200 miles to their new home in Catterick, North Yorkshire. The reconnaissance unit is moving from Robertson Barracks in Swanton Morley to Catterick, North Yorkshire, after 15 years. Many of the school children who lined the streets are from military families and will be leaving their classmates to head to Yorkshire.

The 250 men and women of the regiment were inspected by a number of officials, including the county’s deputy lieutenant brigadier Richard Heywood. 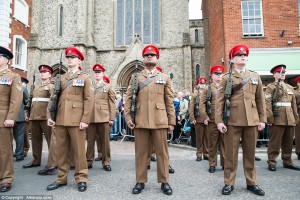 “We’ve found ourselves putting some quite deep roots out here, whether it be in the local community or taking the dog for a walk on beautiful Norfolk beaches,” said Commanding Officer Lieutenant Colonel James Senior, according to ITV News. “We’ve found a new home here so it will be a strain to leave here. But alas all good things must end and we must move onto what’s next for us.”

The Light Dragoons were originally mounted on fast horses and as a result were able to move quickly across the battlefield. Today, they sit on Jackal Fighting Vehicles and they are able to deploy anywhere in the world at very short notice. In 2009 the Light Dragoons were first given permission to march through Dereham with their bayonets fixed.

The farewell parade through the town included military vehicles, a jet flypast and the Band of the Royal Armoured Corps. The deputy lieutenant of Norfolk, brigadier Richard Heywood, took the salute and inspected the troops. 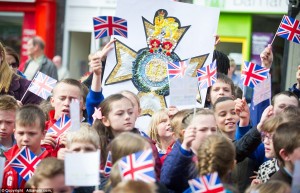 Many of the children lining the route were from military families and are also preparing to move to North Yorkshire. The Light Dragoons will hand over their barracks to another unit in the summer after more than a decade in the town. The last parade came six years after the regiment were first given permission to march through the town with their bayonets fixed.

The Light Dragoons have a proud 300 year history that has seen them take part in the Jacobite Rebellions, in the Waterloo Campaign, charge down the Valley of Death at the Battle of Balaclava, and be one of the first ashore at D Day.

More recently, the regiment was deployed to Iraq in 2003 to assist with the stabilisation of the country after Saddam Hussein’s regime was toppled. They returned again in 2005 to battle counter insurgency and assist with the training of the Iraqi police force.

In Afghanistan the regiment were involved in numerous operations to rid the country of the Taliban, as well as assisting with the creation and training of the Afghan Army. The regiment will hand over the barracks in Swanton Morley to1st The Queen’s Dragoon Guards, in July.